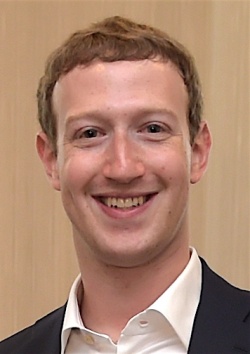 Mark Elliot Zuckerberg (born May 14, 1984) is an American computer programmer, internet entrepreneur, and philanthropist. He is the chairman, chief executive officer, and co-founder of social networking website Facebook. His net worth is estimated to be US $55.3 billion as of October 2016, ranking him as the 5th richest person in the world.

Together with his college roommates and fellow Harvard University students Eduardo Saverin, Andrew McCollum, Dustin Moskovitz, and Chris Hughes, he launched Facebook from Harvard's dormitory rooms. The group then introduced Facebook to other campuses. Facebook expanded rapidly, with one billion users by 2012. Zuckerberg was involved in various legal disputes that were initiated by others in the group, who claimed a share of the company based upon their involvement during the development phase of Facebook.

In December 2012, Zuckerberg and his wife Priscilla Chan announced they would give the majority of their wealth over the course of their lives to "advancing human potential and promoting equality" in the spirit of The Giving Pledge. On December 1, 2015, they announced they would give 99% of their Facebook shares (worth about $45 billion at the time) to the Chan Zuckerberg Initiative.

Since 2010, Time magazine has named Zuckerberg among the 100 wealthiest and most influential people in the world as a part of its Person of the Year distinction.

Zuckerberg was born in 1984 in White Plains, New York. He is the son of dentist Edward Zuckerberg and psychiatrist Karen Kempner. He and his three sisters, Randi, Donna, and Arielle,[15] were brought up in Dobbs Ferry, New York, a small Westchester County village about 21 miles north of Midtown Manhattan. Zuckerberg was raised Jewish and had his bar mitzvah when he turned 13. Afterward, he became an atheist. He has shown an appreciation for Buddhism.

At Ardsley High School, Zuckerberg excelled in classes. He transferred to the exclusive private school, Phillips Exeter Academy, in New Hampshire in his junior year, where he won prizes in science (math, astronomy, and physics) and classical studies. On his college application, Zuckerberg claimed that he could read and write French, Hebrew, Latin, and ancient Greek. He was captain of the fencing team.

Zuckerberg dropped out of Harvard in his sophomore year to complete his business and entrepreneurial projects.