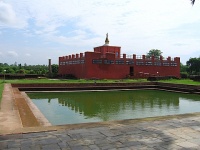 Maya Devi Temple is an ancient Buddhist temple situated at the UNESCO World Heritage Site of Lumbini, Nepal. It is the main temple at Lumbini, the site of the Buddha's birthplace. The temple stands adjacent to a sacred pool (known as Puskarni) and a sacred garden. The archaeological remains at the site were previously dated to 3rd century BCE brick buildings constructed by Ashoka the Great. A 6th century BCE timber shrine was discovered in 2013.

In November 2013, an international team of archaeologists digging under the Maya devi temple discovered remains of an ancient tree shrine dated before 550 BCE, which is possibly the earliest evidence of Buddhist structures ever found and one of the first archaeological evidence of Buddha's life. The excavation was headed by Robin Coningham of Durham University, UK, and Kosh Prasad Acharya of the Pashupati Area Development Trust, Nepal. According to Coningham, the shrine is "the earliest Buddhist shrine in the world".

The research also revealed the presence of fragments of mineralized tree roots, which correlate with the Buddhist tradition: Siddhartha Gautama is said to have been born in a garden, beneath a sal tree, while his mother, Queen Maya Devi, grasped a tree branch.

"This is one of those rare occasions when belief, tradition, archaeology and science actually come together," lead study author Robin Coningham, professor at Durham University in the United Kingdom, said at a press briefing, November 25, 2013.