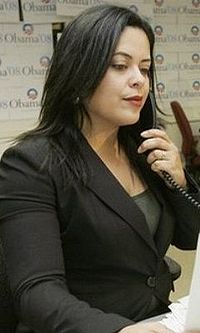 Maya Kassandra Soetoro-Ng, Ph.D. (born August 15, 1970 in Jakarta, Indonesia) is an American high school history teacher and university instructor in Hawaii and the maternal half-sister of Barack Obama, the 44th President of the United States.

Ng was born Maya Soetoro to Indonesian businessman Lolo Soetoro and white American cultural anthropologist Ann Dunham. Her elder half-brother is the 44th President of the United States, Barack Obama. She has said that she was named after American poet Maya Angelou. Like her brother, Soetoro attended the private Punahou School in Hawaii.

At the end of 2003 Soetoro married Konrad Ng (Simplified Chinese吴加儒) of Burlington, Ontario, Canada. Ng is the Canadian-born son of Malaysian Chinese immigrants and an assistant professor at the University of Hawaii's Academy of Creative Media. Their daughter Suhaila was born in 2005.[11] Konrad Ng is now a US citizen.

Soetoro-Ng has described herself as "philosophically Buddhist."