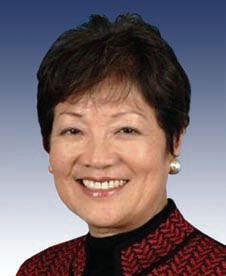 Mazie Keiko Hirono (Japanese: メイジー・ヒロノ; born November 3, 1947) is an American politician. She was the second Asian immigrant elected lieutenant governor of a state of the United States. A lifelong Democrat, she ran against Linda Lingle for governor of Hawaii in 2002, one of the few gubernatorial races in United States history where two major parties nominated women to challenge each other. Hirono is currently the congresswoman for Hawaii's 2nd congressional district. She considers herself a Jodo Shinshu Buddhist, and is often cited with Hank Johnson (D-Georgia), as the first Buddhist to serve in the United States Congress. She is the third woman to be elected to Congress from the state of Hawaii.

Hirono was born in Fukushima, Japan in 1947. In 1955, Hirono's mother escaped an abusive marriage by emigrating to the United States with her children. Raised in Honolulu, Hawaii, Hirono attended Kaʻahumanu Elementary and Koko Head Elementary Schools. She later graduated from Kaimuki High School, which at the time of her attendance had a predominantly Japanese American student body. Upon graduating from high school, Hirono enrolled at the University of Hawaii at Mānoa where, in 1970, she received B.A. in psychology. She left Hawaii briefly to attend Georgetown University Law School. She was inducted into Phi Beta Kappa and obtained her doctorate of jurisprudence in 1978. Hirono quickly returned to Honolulu where she practiced law.

In 2012 she was elected to the U.S. Senate from Hawaii, becoming the first Buddhist Senator.