Meditation on the Dhamma 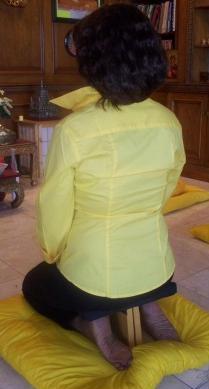 Adapted from excerpts from a chapter in The Complete Book of Buddha's Lists -- Explained. David N. Snyder, Ph.D., 2006.

Dhammanupassana is the pali term for meditation on the Dhamma. It is listed as the fourth Foundation of Mindfulness in the Satipatthana Sutta.

“Remain with the Dhamma as an island, the Dhamma as your refuge, without anything else as a refuge.” Samyutta Nikaya 47.13 and also at Digha Nikaya 26

Bhikkhu Bodhi is the American born monk who has translated much of the Pali Canon. He is a Pali scholar who has done much service to the Dhamma with all of his translations. He confirms that the translation of the fourth foundation of mindfulness does refer to the Dhamma in this introduction to one of the books of the Samyutta Nikaya: “The word is often rendered mind-objects or mental objects, as if it denoted the sixth external sense base, but this seems to narrow and specific. More likely Dhamma here signifies all phenomena, which for purposes of insight are grouped into fixed modes of classification determined by the Dhamma itself – the doctrine or teaching – and culminating in the realization of the ultimate Dhamma comprised within the Four Noble Truths. There are five such schemes: the five hindrances, the five aggregates, the six pairs of internal and external sense bases, the seven factors of enlightenment, and the Four Noble Truths.” (Bhikkhu Bodhi’s year 2000 translation of the Samyutta Nikaya, pp. 1504-1505)

The Buddha taught in many different forms and on many different subjects, depending upon his audience or the specific individual person he was teaching. There are 40 different meditation subjects. For example, a devotional person might be given the subject of “Meditation on the Buddha” or some other devotional figure. A person who has a tendency to hold grudges might meditate on loving-kindness or might meditate on equanimity. The most common meditation subjects are awareness of breath, contemplation of physical sensations, contemplation of thoughts or emotions, and contemplation on the Dhamma. All of these four are discussed at length by the Buddha in the Four Foundations of Mindfulness discourse. The first three have been discussed above.

Meditation on the Dhamma includes such things as reading a Dhamma book. There are a rare few Dhamma teachers who lacking Insight, knowledge, and wisdom state that reading is “bad” and most certainly not meditation. Do not let anyone, even a teacher tell you that reading is wrong. Beware of people who say that reading is bad. What are they afraid of that you might discover? What I am stating here is that reading is meditation and recommended by the Buddha. In the Four Foundations of Mindfulness the Buddha describes specific analytical contemplations in the part of the discourse on the meditation on the Dhamma, sometimes referred to as “mind-objects” in the Buddhist scriptures. This includes the analysis of the five aggregates, the seven factors of enlightenment, the hindrances to meditation, and The Four Noble Truths.

In the deep thought or contemplation of various elements of the Dhamma, the meditator may come to some Insights. The famous monk, Dr. Walpola Rahula, who wrote the classic book, What the Buddha Taught, states that meditation can be on intellectual subjects and that reading a Dhamma book is a form of meditation (meditation on the Dhamma). This book by Dr. Rahula written in 1959 is still considered one of the best introductory books on Buddhism and is still the recommended book for beginners and others interested in the Buddhist Path.

When the Buddha taught he used many different forms of instruction depending upon whom he was talking to. If the person was analytically inclined then he would use words to encourage that strength in the person’s practice. Many times an analytical discussion led to Insight and even enlightenment. Venerable Koṇḍañña, one of the first disciples of the Buddha attained stream entry (sotapanna) just from hearing the Buddha's First Discourse. In the scriptures of Buddhism there is a story of a whole group of monks who attained enlightenment after discussing Dhamma in an analytical, intellectual way: "That is what Ven. Khemaka said. Gratified, the elder monks delighted in his words. And while this explanation was being given, the minds of sixty some monks, through no clinging, were fully released from fermentations; as was Ven. Khemaka's." (Khemaka Sutta, Samyutta Nikaya, Sutta Pitaka).

This is not to say that simply reading a Dhamma book will give you the wisdom of enlightenment. No, not by itself, anyway. Intellectual knowledge and wisdom through inference and analysis is good, but not the insight of enlightenment or an enlightenment experience. However, during the process of contemplation or even the reading of a Dhamma book, an Insight may occur. This insight is an actual experience by the meditator and not just mere blind acceptance of what is written in the book or mere intellectual knowledge.

How many times have you read something in some magazine or a newspaper or a book and a “light-bulb” appears over your head? You get some kind of idea about something. Maybe it is an idea of yours on how to “build-a-better-mouse-trap” for example. Sometimes ideas pop into our head, inventions, better ways of doing something, etc. This usually happens to us after or during some kind of analysis such as reading a book. In the book we were reading there may even be only a remote similarity to the idea we created. The Insight just appears.

Contemplate on one of the following elements of the Dhamma:

Do the Four Noble Truths agree with analysis and logic? If so notice if they can be experienced in the analysis of the mind-body.

The Seven Factors of Enlightenment

Read a Dhamma book. Read a couple more. If you like to read, go for it. Read several. Read the original words of the Buddha in the scriptures of Buddhism. Read the encyclopedic Path of Purification and / or the Path of Freedom, written in the fifth century and the first century respectively.

Dhammanupassana in the Satipatthana Sutta