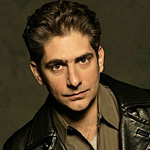 James Michael Imperioli (born March 26, 1966), commonly known as Michael Imperioli, is an American actor. He is perhaps best known for his role as Christopher Moltisanti on The Sopranos. He also appeared as Det. Ed Green's temporary replacement, Det. Nick Falco, in the TV drama series Law & Order. Imperioli has spent the 2008-2009 television season as Detective Ray Carling in the US version of Life on Mars.

In addition to his role on The Sopranos, Imperioli has appeared in a number of films, including Goodfellas, Jungle Fever, Bad Boys, The Basketball Diaries, Clockers, Dead Presidents, Lean on Me, I Shot Andy Warhol, Last Man Standing, Shark Tale, High Roller: The Stu Ungar Story, and Summer of Sam, which he also co-wrote and co-produced. In addition, he has also written a number of episodes for The Sopranos.

In Goodfellas, Imperioli plays Michael "Spider" Gianco, whom Joe Pesci's character, Tommy DeVito, shoots in the foot for not getting him a drink. In The Sopranos he gets to pass the favor on, shooting a bakery clerk in the foot for showing no respect to him. On his way out of the scene, the victim cries out, "You shot me in the foot!" - Christopher retorts, "it happens" as he walks out the door, in a humorous allusion to his role in Martin Scorsese's film.

He serves as artistic director of an Off-Broadway theater, Studio Dante, which he created together with wife, Victoria. He is also the lead singer/guitarist for a rock band named La Dolce Vita (Italian for "the sweet life" and the title of a famousFederico Fellini film).

He was one of the customary three guests — along with Claudine Pépin — on episode MB2E08 ("San Giuseppe") of Mario Batali's Food Network television show Molto Mario, where the chef introduced him simply as "my friend Mike."

He said on Dennis Miller he auditioned 400 times before getting a part.

In 1995, he married Victoria Chlebowski, with whom he has two sons.

He lives in the Tribeca neighborhood of New York City.

Imperioli is an active member of The Jazz Foundation of America. He hosted their annual benefit, A Great Night in Harlem, in May 2009. The benefit concert at the Apollo Theater in Harlem celebrated the foundation's 20th anniversary.

He officially became a Buddhist in December of 2008 taking refuge in the Buddha, Dhamma, Sangha at a temple. (A ceremony is not required, but he chose to do so formally.)