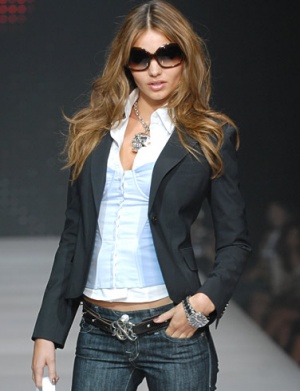 Miranda May Kerr (born 20 April 1983) is an Australian model best known as one of the Victoria's Secret Angels. She was the first Australian addition to the Victoria's Secret campaign, and was the face of Australian fashion chain Portmans and now David Jones Limited. Kerr entered modeling in the fashion industry in her early-teens after winning a 1997 Australian nation-wide model search hosted by Dolly magazine and Impulse fragrances.

Kerr was born in Sydney but raised in Gunnedah, New South Wales, a small rural town. Her parents are Therese and John Kerr, and she has a younger brother named Matthew. During her childhood, Kerr stated she "raced motorbikes and rode horses on [her] grandmother's farm" and describes her early life in the Australian countryside as "very grounding ... there wasn't any pretentiousness and no one really cared what you were wearing. You could just be you." Miranda's family backgroud is European with her mother being 1/4 Filipino.

Her family moved to Brisbane to allow Kerr and her brother to experience city life. She graduated from All Hallows' School and planned to study nutrition before pursuing modeling.

Kerr practises Nichiren Buddhism a Japanese branch of Buddhism as a member of the Soka Gakkai Internationa and believes "we have a responsibility to bring peace and harmony to our lives and the world." As part of her Nichiren beliefs, Kerr reportedly chants every morning and night for 20 minutes, practises yoga, meditates and reads widely on spirituality.