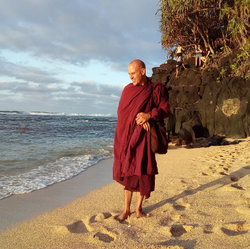 Originally a contract computer programmer by trade, Bhante Subhūti is an American Buddhist Monk with roots in the Sri Lanka and Myanmar Forest Traditions. He ordained in 2001 under The Most Venerable Pa-Auk Sayadawgyi as his preceptor, a monk who is known for his strict practice of meditation and following the full list of monks’ rules which is very rare in the world today. In 2007 he chose to go to Na-Uyana Monastery in Sri Lanka which also had similar rules and meditation standards. In Sri Lanka and still as a monk, he went through another ordination ceremony which reset his rains count and therefore, his seniority. He returned again to Pa-Auk in Myanmar in 2012. Three years later, in 2015, Bhante Subhūti had an opportunity to go to Kauai, Hawaii, USA . He was very close to establishing a monastery but decided to leave for one year to allow the donors to save money. Back in Myanmar, he returned to school an earned a Diploma in Buddhism at the International Theravada Buddhist Missionary University. He is now, officially, has 12 “rains” (years of seniority), but has the combined total experience of 18 years. His heart has often floated back to Kauai and he has now returned again to see if the vision of a monastery in Kauai can be revived. Bhante Subhūti is very strict in following the Theravada Buddhist monks’ 227 rules, and has not handled money in 18 years. He enjoys meditation, learning, teaching and collecting his food by alms where it is possible whether it be in Myanmar, Sri Lanka or Kauai itself. He says, “It works, but you just have to have faith that it will work.”