Difference between revisions of "Mucalinda" 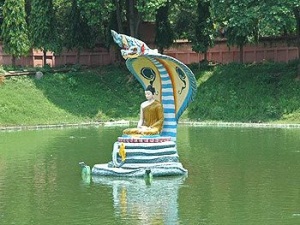 A statue of Mucalinda protecting the Buddha at Bodh Gaya, India

Mucalinda, Muchalinda or Mucilinda is the name of a naga (a snake like being), who protected the Buddha from the elements after his enlightenment.

It is said that four weeks after the Buddha began meditating under the Bodhi Tree, the heavens darkened for seven days, and a prodigious rain descended. However, the mighty king of serpents, Mucalinda, came from beneath the earth and protected with his hood the one who is the source of all protection. When the great storm had cleared, the serpent king assumed his human form, bowed before the Buddha, and returned in joy to his palace.

Sujata is the woman who offered food (rice cooked in milk) to the Buddha when he was performing his ascetic practices (long fasts) before enlightenment. The Buddha was near death as this was before he realized and practiced the middle way. Later after enlightenment, Mucalinda, the large cobra snake protected the Buddha. It is interesting to note that in the Judeo-Christian bible the Fall of man is blamed on a woman and a snake, but in Buddhism the world is saved (by helping the Buddha from death) by a woman and a snake. Sujata would later become a bhikkhuni (Buddhist nun).