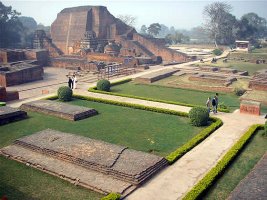 Nālandā was a small village about 11 kilometres north of Rajagaha on the main road to Pāṭaligāma. The Buddha passed through or sometimes stayed at Nālandā and delivered several important discourses there. One of his disciples, Kevaḍḍha, described the village as "rich, prosperous, filled with people, crowded with those devoted to the Buddha" (Digha Nikaya I. 211).

Sariputta was born and passed away in Nalanda. King Ashoka built a stupa commemorating Sariputta at Nalanda.

Historical studies suggest that the University at Nalanda was established during the reign of a king called Śakrāditya. Both Xuanzang and Prajñavarman cite him as the founder, as does a seal discovered at the site.

Nalanda University was one of the first great universities in recorded history and one of the world's first residential university as it had dormitories for students. It is also one of the most famous universities. The university was considered an architectural masterpiece, and was marked by a lofty wall and one gate. Nalanda had eight separate compounds and ten temples, along with many other meditation halls and classrooms. On the grounds were lakes and parks. The library was located in a nine storied building where meticulous copies of texts were produced.

The Tang Dynasty Chinese pilgrim and scholar Xuanzang studied, taught and spent nearly 15 years at Nalanda University. He has left detailed accounts of the university in the 7th century.

During the early Gupta period (4th century CE) a monastery was built at Nālandā which gradually evolved into a monastic university and became the premier seat of Buddhist learning in India. Much of what we know of this university is derived from the accounts of Chinese monks who came to study there. The university was established in about 427 CE, which makes it the oldest Buddhist university and also one of the oldest universities of any kind. At its height during the 7th century there were 8,500 students and 1,510 teachers. Students are known to have come from all over India and also from China, Korea, Tibet, Sri Lanka and Java. The curriculum included early Buddhism, Mahāyāna, Hindu philosophy and secular subjects like grammar, prosody, logic and rhetoric. There were three large libraries housing books from different countries and in a variety of languages. When Nālandā was sacked and burned by Muslim invaders in 1193 it had already been in decline for several centuries. Today the ruins of Nālandā cover a huge area and are a popular destination with pilgrims and tourists. A nearby museum displays many of the sculptures that once graced the university’s halls.