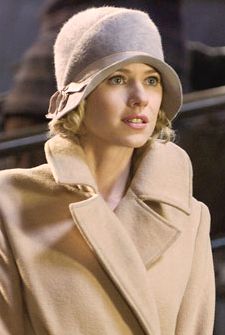 She is known for her roles in Mulholland Drive, the film remakes of The Ring, King Kong, Funny Games and her Academy Award-nominated role in the film 21 Grams.

Her father's manic laugh can be heard in Pink Floyd's "Speak to Me" and "Brain Damage" and her mother's comments can be heard in "The Great Gig in the Sky" and "Money" from The Dark Side of the Moon. Watts is pictured in her mother's arms with her father, brother, the band, and other crew members, in the hardback/softcover edition of drummer Nick Mason's autobiography of the band Inside Out.

Watts dated Stephen Hopkins in the 1990s and actor Heath Ledger from August 2002 to May 2004. Since the spring of 2005, Watts's partner has been the actor Liev Schreiber. She confirmed in an interview in late January of this year that Liev had in fact given her a ring (which she was not wearing at the time) but that neither of them wanted to rush into marriage.This would confirm that they are engaged but had no serious plans for marriage at the time. Yet rumors that they had been married in a secret ceremony surfaced when a video of her and her family, which featured them planting trees for the Jewish National Fund in Israel, also featured Liev referring to her as his wife came out in early June. Liev, known to play tricks on the media, had once before called her as such in 2007 but later revealed that it was all a joke. Since there has been no proof given other than Liev's word in the video, it is unclear as to whether or not he is telling the truth or simply playing another joke.

The couple's first son, Alexander "Sacha" Pete, was born on 25 July 2007 in Los Angeles, and their second son, Samuel "Sammy" Kai, on 13 December 2008 in New York City. After a temporary hiatus from acting, she returned to work with The International, her first project since becoming a mother.

Watts is a close friend of Benicio del Toro, with whom she co-starred in 21 Grams. Watts is friends with actress Isla Fisher, and is godmother to The Mentalist's Simon Baker's oldest daughter, Stella. She is also best friends with fellow Australian actrees Nicole Kidman, after having met when they were in their teens during an audition. Watts even moved in with Kidman for a time as nanny to Kidman's, and her then husband Tom Cruise, children when Watts's own career had yet to gain commercial success.

After filming The Painted Veil , she became attracted to Buddhism, claiming, "I have some belief but I am not a strict Buddhist yet. There was a lot of excitement and energy there."