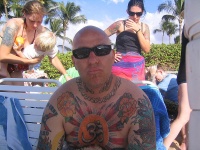 Noah Levine (1971- ) is an American Buddhist teacher and the author of the books Dharma Punx: A Memoir and Against the Stream. As a counselor known for his philosophical alignment with Buddhism and punk ideology, he identifies his Buddhist beliefs and practices with both the Theravada and Mahayana traditions. He holds a master's degree in counseling psychology from the California Institute of Integral Studies, San Francisco.

As a youth, Levine was incarcerated several times. His first book, Dharma Punx, details teenage years filled with drugs, violence, and multiple suicide attempts—choices fueled by disillusionment with American mainstream culture. His substance abuse started early in life; at age six he began smoking marijuana and finally ended in a padded detoxification cell in juvenile prison 11 years later. It was in this cell where he hit "an emotional rock bottom" and began his vipassana practice "out of a place of extreme drug addiction and violence". While incarcerated, he saw for the first time how the practice his father taught him gave him the tools to relieve the fear and uncertainty that pervaded his life.

He currently leads Dhamma and vipassana meditation retreats and workshops across the United States and teaches weekly meditation classes in Los Angeles. A member of the Prison Dharma Network, Levine works with juvenile and adult prison inmates, combining meditation techniques with psychotherapy. He "[explores] how they can have a deeper understanding of what has happened and what they need to do in order to be free, on many levels—free from prison, free from the trauma of the past."

He has helped found several groups and projects including the Mind Body Awareness Project, a non-profit organization that serves incarcerated youths.