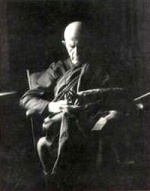 In 1922, he moved with his parents to Berlin, where he met with other German Buddhists and also had access to Buddhist literature in German language. He first came across the writings of Ven. Nyanatiloka Thera (1878-1957), the former German violin virtuoso Anton Gueth, which had already been published in Germany. Young Siegmund had learned Ven.

Nayanatiloka Thera had established a monastery for Western Monks on an island lagoon (opposite the Railway station) Polgasduwa, Dodanduwa named Island Hermitage. This news stirred his conscience to come to Asia and become a Buddhist Monk.

However this expectation did not concretecize for some time. In 1932, his father passed away and did not wish to leave his widowed mother in the lurch. Then Adolf Hitler, came to power in Germany. Millions of Jews were gassed to death in gas chambers.

Possibly knowing he and his mother too would end up in gas chambers in November 1935, he left Germany along with his mother to Vienna, where they had relatives. Having arranged his mother to stay in Vienna, in early 1936 he left Europe for Sri Lanka and joined Ven. Nyanatiloka Thera at the Island Hermitage, Polgasduwa, Dodanduwa.

After several months of studies in June 1936 he was ordained as a novice under the name Nyanaponika and in 1937 was conferred Higher Ordination (Upasampada), under the Tutelage of Nyanatiloka Thera.

In 1939, after the Nazis invaded Austria, Ven. Nyanaponika Thera arranged for his mother and other relatives to come over to Sri Lanka. She passed away in Colombo in 1956. Through the influence of his son and the generous hosts she embraced Buddha Dhamma and became a devoted Buddhist lady.

Then the Second World War broke out in 1939, and the British Government had all German males resident in their colonies consigned for interment suspecting them to be German spies. The interment was first at Diyatalawa Army cantonment in Sri Lanka and later at Dehra Dun in northern India.

Despite these traumatic experiences as prisoner of war, during this period, Ven. Nayanaponika Thera completed the German translations of the Sutta Nipata, the Dhammasangani (the first book of the Abhidhamma Pitaka) and its commentary. He also compiled an anthology of texts on Satipattana Meditation. That was when at Diyatalawa and the balance writing of what Ven. Nyanaponiak Thera began was concluded at Dehra Dun, India.

With the cessation of war, the two Bhikkhus were released from interment at Dehra Dun and returned to Sri Lanka in 1946 and resided at the Island Hermitage, Dodanduwa. In early 1951 they were conferred citizenship of Sri Lanka.

In 1946, Ven. Nyanatiloka, Maha Thera was offered a hermitage in the Udawattekelle Forest Reserve, and being advanced in age preferred the cooler climate of Kandy rather than to the hot and stuffy sea - coast climate of Dodanduwa. In 1947, Ven. Nyanaponika Thera too joined him at the new Forest Hermitage.

In 1952, both Venerable Nyanatiloka, Maha Thera and Nyanaponika There were invited by the Burmese (Myanmar) Government for consultation in preparation of the Sixth Buddhist Council, to be convened in 1954 to re-edit and reprint the entire Pali Canon and its commentaries. On the conclusion of the consultations Ven. Nyanaponika Thera stayed on in Burma for a period of training in Insight Meditation (Vipassana) under the well renowned meditation teacher Ven. Mahasi Sayadaw Thera.

The experience he gathered motivated him to write his best known Magnum Opus, 'The Heart of Buddhist meditation' published by Buddhist Publication Society with many editions and translated into more than seven languages. This is a prescribed text in universities in the Study of Buddhism.

In 1954, the teacher and the pupil returned to Burma for the opening ceremonies of the Council, which was held in a cave - structure built similar to the Sattaprani Caves in Rajagaha (Rajgir) of India, where first Buddhist Council was held. For the closing ceremonies in 1956 Ven. Nyanaponika Thera went to Burma alone as his teacher was indisposed.

In 1957, the health of Ven. Nyanatiloka, Maha Thera deteriorated and he moved to Colombo for easy and ready medical attention. Finally on May 28, 1957, the great pioneering scholar monk passed away and was accorded a State Funeral at the Independence Square, Colombo attended by the Prime Minister S.W.R.D. Bandaranaike, many State officials, both the laity and religious dignitaries and prelates of all Nikayas.

His ashes were enshrined at the Polgasduwa Island Hermitage, Dodanduwa and a tombstone was built to perpetuate his memory. Ven. Nyanaponika Thera, thereafter keeping up to the request of his teacher, revised Ven. Nyanatiloka Thera's German translation of the complete Anguttara Nikaya, retyping the five volumes in full by himself, and also compiling a forty paged index to the work.

Six months after the death of his teacher, the career of Ven. Nyanaponika Thera was to be launched in a new direction, a permanent contribution to the spread of Buddhism worldwide. A prominent lawyer in Kandy A.S. Karunaratne suggested to his friend, Trinity College teacher in retirement Richard Abeysekera, that they start a society for the publication of Buddhist literature in English, mainly to be distributed abroad. The unanimous decision was Ven. Nyanaponika Thera in the Udawattekelle Forest Reserve Aramaya would be the best director of the Institution. Thus on the New year's Day of 1958, the Buddhist Publication Society (BPS) was born.

Devoting his entire time and energy to writings of the society, he wrote tracts, encouraged others to write, collated important Suttas, translated them and had them published. In addition to his own writings he had 200 wheel titles and 100 Bodhi Leaves (booklets) authored by numerous scholars and books were issued during his editorship of the BPS.

Ven. Nayanaponika Thera's biography is completely submerged in his writings. With advancing age having a heavy toll on his strength, in 1984, Ven. Nayanaponika Thera retired as editor of BPS and in 1988 he retired as President, accepting appointments as BPS's distinguished Parton. His fame and recognition as an exponent of authentic Theravada Buddhism reached all corners of the globe.

In 1978, the German Oriental Society appointed him an honorary member in recognition of his combination of objective scholarship with religious practice as a Buddhist Monk. In 1987, the Buddhist and pali University of Sri Lanka at its first convocation, conferred on him its first ever Honoris Causa Degree of Doctor of Literature.

In 1990, he received the Honoris Causa Degree of Doctor of Letters from the University of Peradeniya. In 1993, The Amarapura Maha Sangha Sabha to which he belonged for 56 years, conferred on him the honorary title of Amarapura Maha Mahopadhyaya Sasana Sobhana (The Great Mentor of the Amarapura Maha Sasana Sabha, Ornament of Teaching).

His last birthday which fell on July 21st 1994, was celebrated by his friends and the BPS staff with the release of the BPS edition of his book. The Vision of Dhamma, a collection of his writings from Wheel and Bodhi leaves series. On the 19th of October 1994, the last day of his 58th Rains Retreat as a Bhikkhu, he breathed his last in the pre-dawn quietude of the Udawattekelle forest hermitage.

His body was cremated at Mahiyawa Cemetery Kandy at which a large gathering of religious and lay dignitaries as well as his many friends and admirers. On the 29th of January after the traditional of Buddhistic three-month Alms Giving, his remains were interred at the Island Hermitage in Dodanduwa, where he spent his formative years as a Bhikkhu. His tombstone lies in close proximity to that of his teacher Ven. Nyanatiloka, Maha Thera.