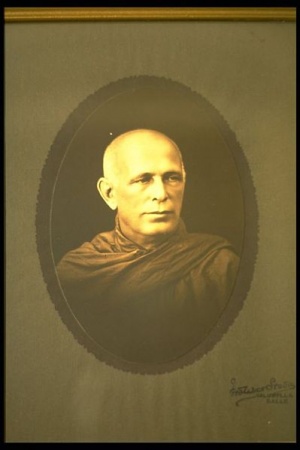 His example was soon followed by other European monks of the calibre of the Ven. Nyanaponika, Ven. Nyanawimala and Ven. Nyanamoli among others. All of them deserve the Sri Lankan State's highest recognition for the immense contribution they made to the dissemination of Theravada Buddhism worldwide by their scholarly research and writings which awakened the Western mind to the teachings of the Enlightened One.

Unlike the Westerners who came here to impose their `civilization' on us and colonize this country, these European bhikkus made their countrymen appreciate Sri Lanka's Buddhist culture and what it had to offer to them by way of spiritual emancipation. In this context these monks placed Sri Lanka on the world map. The island thus became a centre of attraction for spiritual seekers from Europe.

These white skinned bhikkhus became part of Sri Lankan society. Our Buddhists welcomed them and looked after them with great fervour and solicitude.

Yet no Sri Lankan Government so far has been grateful to recognize at least nominally the spiritual legacy these European monks left behind. No commemorative stamp has been issued, no statue erected and no street or building has been named after the Ven. Nyanatiloka or any of the other Western bhikkus. Without question that Sri Lanka has an obligation to keep their memory alive.

The Ven. Gnantiloka who stands foremost in the history of Buddhism in Germany was the founder of the well-known Island Hermitage (Polgasduwa in Sinhala) in Dodanduwa, Sri Lanka.

Born at Weiesbaden, Germany on February 19, 1878, his lay name was Anthen Florus Gueth. He became attracted to Buddhism at an early age. During his youth his devotion was to music the study of which he took up after matriculating from a high school in Wiesbaden.

The story goes that his interest in Buddhism was kindled by a remark that his music teacher made. The teacher while enlarging on the charm of a certain symphony had said that those who listened to it when it is played to perfection, could enjoy as high a bliss as one who attained the enlightenment of a Buddha.

Young Anthen then devoured whatever Buddhist literature that was available in his country which by that time was a major world power. He had just turned 25 when he paid his first visit to Sri Lanka in 1903, since which year he considered this country his spiritual home. Shortly afterwards he proceeded to Myanmar where he became a bhikkhu. The very next year he received higher ordination (upasampada) and returned to Sri Lanka as the Ven. Nyanatiloka.

Here he continued to study Pali and in 1906 his first German publication, The Word of the Buddha, appeared. It was destined to become a classic in Buddhist Literature. An English translation of the book by Bhikku Silaccara was issued in Rangoon in 1907.

In 1911, the Ven. Nyanatiloka established the Island Hermitage in a most enchanting setting. It is in the middle of a beautiful lagoon in Ratgama, near Dodanduwa where he taught numerous pupils from the world over.

But his peaceful activities were interrupted all too soon with the outbreak of World War I in 1914. The following year, riots broke out in Sri Lanka and the British Colonial Government took a panic-stricken view of the whole event.

A sensational story about German spies in the guise of Buddhist monks having a hand in the riots, alarmed British authorities who promptly interred the Ven. Nyanatiloka and his pupils. After internment in Sri Lanka, he was deported to Australia. Following his release in 1916 he went to China but was interred again when that country too joined the war against Germany. He was repatriated to the Fatherland in 1919 the year after the world war ended.

An attempt made by him to re-enter Sri Lanka in 1920 failed. So he went to Japan where he taught for five years at universities and other educational institutions and became a Professor at the Komazawa University, Tokyo.

At last in 1926 he was allowed to return to the Island Hermitage in Sri Lanka.

But during his absence, the huts and other buildings had gone to ruins. Soon, however, new ones came up and again eager students from various countries arrived at the hermitage to seek his guidance.

The rise of Hitler in Germany brought for the Ven. Nyanatiloka a repetition of his earlier experience. Following the British declaration of war on Germany in 1939, the Ven. Nyanatiloka and other Germans in the hermitage were again interred, this time at Diyatalawa. For the first two years the German bhikkus were held in Sri Lanka and with the Japanese conquest of Singapore, they were removed to Dehra Dun in North India. The next six years were spent behind barbed wire until they were allowed to return to Sri Lanka in 1948.

A larger part of the Ven. Nyanatiloka's work was done in the German language. His most voluminous publication is the complete translation of Anguttara Nikaya (5 volumes of 2000 pages). He also translated the Visuddhi Magga (Path to Purification) bringing for him a place in the first ranks of Buddhist scholarship. Most of his English works, including the Fundamentals of Buddhism were published by the Buddhist Literature Society, Colombo.

The Ven. Nyanatiloka was the Patron of the Lanka German Dharmadutha Society, which organized the first permanent Buddhist mission to Germany from this country.

The Maha Thera passed away on May 28, 1957 at the premises of the Dharmadutha Society, Colombo, where he spent the last rainy season (vassana) retreat of his long and fruitful life as a member of the Buddhist Sangha.

He wrote the Buddhist Dictionary, which includes hundreds of important Pali words and phrases, making the direct teachings accessible to all. This dictionary is used in this http://www.dhammawiki.com/ under the category: Pali terms.