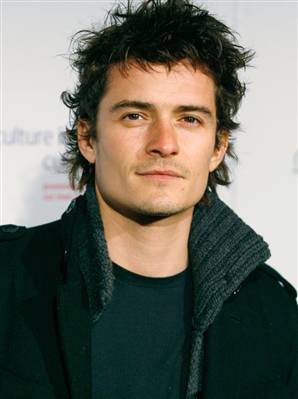 Orlando Jonathan Blanchard Bloom (born 13 January 1977) is a classically trained English actor. He had his break-through roles in 2001 as the elf-prince Legolas in The Lord of the Rings and starting in 2003 as blacksmith Will Turner in the Pirates of the Caribbean trilogy of films, and subsequently established himself as a lead in Hollywood films, including Troy, Elizabethtown and Kingdom of Heaven. Bloom most recently appeared in the sequels Pirates of the Caribbean: Dead Man's Chest and Pirates of the Caribbean: At World's End. He is starring in the upcoming ensemble film New York, I Love You, Sympathy for Delicious, and Main Street. Bloom made his highly anticipated professional stage debut in West End's In Celebration at the Duke of York's Theatre, St. Martin's Lane, which ended its run on 15 September 2007.

Bloom has said that he tries "not to exclude [himself] from real life as much as possible". He is a Manchester United fan and lives in London. During filming in Morocco for Kingdom of Heaven, Bloom rescued and adopted a dog, Sidi (a black Saluki mix with a white mark on his chest). Bloom is a practising Buddhist; In 2004, he became a full member of Soka Gakkai International, a lay Buddhist association affiliated with the teachings of Nichiren. Bloom has also been a part of Global Green, an environmental company, since the early 2000s. As part of his environmental involvement, he has renovated his London home to use solar panels, incorporate recycled materials, and utilize energy efficient lightbulbs. Bloom has been approached by UNICEF to act as an international ambassador. Bloom met American actress Kate Bosworth outside a coffee shop in 2002, where he was introduced to her by a mutual friend. He met her again at the premiere of The Lord of the Rings: The Two Towers later that year. The two had an "on-and-off relationship" from 2002 until splitting up in September 2006.