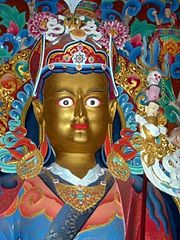 Padmasambhava, The Lotus Born, is said to have transmitted Tantric Buddhism to Bhutan and Tibet in the 8th century. In those lands he is better known as Guru Rinpoche ("Precious Master") or Lopon Rinpoche, where followers of the Nyingma school regard him as the second Buddha.

He said: "My father is the intrinsic awareness, Samantabhadra. My mother is the ultimate sphere of reality, Samantrabhadri. I belong to the caste of non-duality of the sphere and awareness. My name is the Glorious Lotus Born. I am from the unborn sphere of all phenomena. I consume concepts of duality as my diet. I act in the way of the Buddhas of the three times."

His Pureland Paradise is Zangdok Palri (the Copper-coloured Mountain).

According to tradition and legend, Padmasambhava was incarnated as an eight-year-old child appearing in a lotus blossom floating in Lake Dhanakosha, in the kingdom of Uddiyana, traditionally identified with the Swat Valley of Ancient India in present-day Pakistan. His special nature was recognized by the local king who married him to one of his daughters, Mandarava. She and Padmasambhava's other main consort, Yeshe Tsogyal, developed into realised practitioners. Many thangkas and paintings show Padmasambhava in between them.

His fame became known to Trisong Detsen, the 38th king of the Yarlung dynasty, and the first Emperor of Tibet (742–797), whose kingdom was beset by evil mountain deities. The king invited Padmasambhava to Tibet where he used his tantric powers to subdue the evil deities he encountered along the way, eventually receiving the Emperor's wife, identified with the dakini Yeshe Tsogyal, as a consort. This was in accordance with the tantric principle of not eliminating negative forces but redirecting them to fuel the journey toward spiritual awakening. In Tibet he founded the first monastery in the country, Samye Gompa, initiated the first monks, and introduced the people to the practice of Tantric Buddhism.