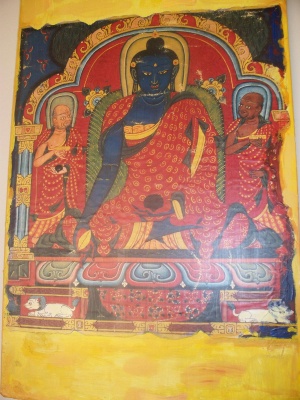 Buddhist art originated on the Indian subcontinent following the historical life of Buddha, 6th to 5th century BCE, and thereafter evolved by contact with other cultures as it spread throughout Asia and the world.

Early Buddhist art followed one Indian aniconic tradition, which avoids direct representation of the human figure. Around the 1st century CE an iconic period emerged lasting to this day which represents the Buddha in human form.

Buddhist art followed believers as the Dhamma spread, adapted, and evolved in each new host country. It developed to the north through Central Asia and into Eastern Asia to form the Northern branch of Buddhist art, and to the east as far as Southeast Asia to form the Southern branch of Buddhist art. In India, Buddhist art flourished and even influenced the development of Hindu art, until Buddhism nearly disappeared in India around the 10th century due in part to the vigorous expansion of Islam alongside Hinduism.

Anthropomorphic representations of the Buddha started to emerge from the 1st century CE in northern India. The two main centers of creation have been identified as Gandhara in today’s North West Frontier Province , in Pakistan, and the region of Mathura, in central northern India.

This iconic art was characterized from the start by a realistic idealism, combining realistic human features, proportions, attitudes and attributes, together with a sense of perfection and serenity reaching to the divine. This expression of the Buddha as a both a man and a god became the iconographic canon for subsequent Buddhist art.

As Buddhism expanded outside of India from the 1st century CE, its original artistic package blended with other artistic influences, leading to a progressive differentiation among the countries adopting the faith.

Paintings became more popular after the start of the Common Era, including the thangkas of Tibet and Nepal regions. Various temples included paintings depicting the life of the Buddha and other arahants on the temple walls and ceilings.

The painting above right depicts the Medicine Buddha flanked by two arahants. Since these paintings are just symbolic, there can be great use of this art work across traditions. For example, for a Pure Land Buddhist, the image can be called Amitabha; for a Theravada Buddhist, it can be seen as the Buddha. The two arahants on each side appear to be Sariputta and Moggallana because it is said that Moggallana had a darker complexion and one of the arahants is darker.

Great artistic skill is used in making the paintings and thangkas and the use of beautiful pictures and other artistic forms in Buddhist temples is at least skilful means, for the understanding of Buddhism and the wholesome representation of the teacher and teachings at its best.