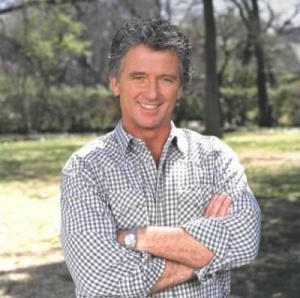 Duffy was born in Townsend, Montana, the son of tavern owners Marie and Terence Duffy. He is of Irish descent.[citation needed] Duffy married Carlyn Rosser, ten years his senior, in a Buddhist ceremony conducted on February 15, 1974. The couple had two sons, Padraic Terrence Duffy (b. 1974) and Conor Frederick Duffy (b. 1979) and maintained a home near Eagle Point, Oregon. Duffy was an avid collector of antique dolls and children's books. Though a former Catholic and named after St. Patrick[citation needed] because he was born on March 17, he converted to Buddhism at the approximate time of his earliest meetings with his wife, who was then a ballet dancer with the First Chamber Dance Company of New York.

Academically, Duffy earned credentials in theater arts that entitled him to teach, graduating from the University of Washington in 1971 with a degree in drama. He ruptured both his vocal cords during his senior year of college, so he created the position of actor-in-residence, where he worked as an interpreter for ballet, opera, and orchestra companies in Washington. He also taught mime and movement classes during this period, during which he met his wife.

His nephew is Major League Baseball pitcher Barry Zito of the San Francisco Giants, whose mother is his wife's sister.

On November 18, 1986, Duffy's parents were murdered by two young men, Kenneth Miller and Sean Wentz, during an armed robbery of the Montana bar his parents owned. Wentz and Miller, who were teenagers at the time, were convicted of the murders and sentenced to 75 years in prison. In 2001, Miller appeared before the Montana Parole board after Sean Wentz recanted his original story, admitting that he was the sole gunman. Miller was denied clemency in 2001 but was released on parole in March 2006. Sean Wentz is still serving out his sentence.

He is also a fan of Battlestar Galactica, Muppets, and comic book superhero movies.