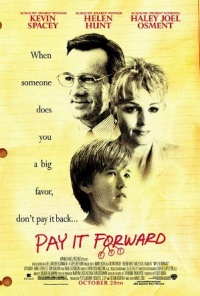 Pay It Forward is a 2000 American dramatic film based on the novel of the same name by Catherine Ryan Hyde. It stars Haley Joel Osment as a boy who launches a good-will movement, Helen Hunt as his single mother, and Kevin Spacey as his social-studies teacher.

When 11-year-old Trevor McKinney (Osment) begins seventh grade in Las Vegas, Nevada, his social studies teacher Eugene Simonet (Spacey) gives the class an assignment to devise and put into action a plan that will change the world for the better. Trevor calls his plan "pay it forward", which can be described as a charitable pyramid scheme, based on good deeds rather than profit. "Paying it forward" means the recipient of a favor does a favor for a third party rather than paying the favor back.

Trevor does a favor for three people, asking each of them to return the favor by doing favors for three other people, and so on, along a branching tree of good deeds. Trevor does his first good deed for a homeless man named Jerry (Caviezel). This effort initially appears to be unsuccessful, but Jerry will pay his debt forward later in the film by talking a suicidal woman out of jumping off a bridge.

Meanwhile, Trevor's mother Arlene (Hunt) meets Eugene after discovering Jerry in their house and confronting Eugene about Trevor's project. Then Trevor selects Eugene as his next "pay it forward" target and tricks Eugene and Arlene into a romantic dinner date. This also appears to fail, but then Trevor and Arlene argue about her alcoholism and she slaps him in a fit of anger. The two adults are brought together again when Trevor runs away from home and Arlene asks Eugene to help her find him.

Trevor's school assignment marks the beginning of the story's chronology, but the opening scene in the film shows one of the later favors in the "pay it forward" tree, in which a man gives a car to Los Angeles journalist Chris Chandler (Mohr). As the film proceeds, Chandler traces the chain of favors back to its origin in Trevor's school project. After her date with Eugene, Arlene paid Trevor's favor forward by forgiving her own mother Grace (Dickinson) for her mistakes in raising Arlene, and Grace, who is homeless, helped a gang member escape from the police. This gang member then helped the daughter of the man who gave Chandler his new car.

After finding Trevor, Arlene begins to pursue Eugene romantically. Eugene has burn marks visible on his neck and face, and he initially resists Arlene's overtures. When they finally sleep together, he is seen to have extensive scarring over his torso. Arlene accepts Eugene's physical disfigurement, but abandons their relationship when her alcoholic ex-husband Ricky (Bon Jovi) returns to her, claiming to have given up his alcoholism and abusiveness. Ricky's return angers Eugene, whose own mother had a habit of taking his abusive, alcoholic father back. He explains that his father intentionally burned him, and he warns Arlene of Ricky's potential to abuse Trevor. When Ricky resumes his abusive behavior, Arlene realizes her mistake and asks him to leave again.

Chandler finally identifies Trevor as the originator of "pay it forward" and conducts a recorded interview in which Trevor descibes his hopes and concerns for the project. Eugene, hearing Trevor's words, realizes that he and Arlene should be together. As Eugene and Arlene reconcile with a passionate embrace, Trevor is stabbed to death by a bully. This news is reported on television, and Eugene and Arlene are soon visited by hundreds of people who have participated in the "pay it forward" movement, gathering in a vigil to pay their respects to Trevor.

There have been many non-profit organizations using the pay it forward philosophy, most after getting inspiration from this movie. The format at the S. N. Goenka vipassana retreats has been the pay it forward way for several decades before this movie came out. At the Goenka retreats, participants get to stay all ten days at no charge, including the room, the meals, and the instruction. After completing the ten days, participants are allowed to make voluntary contributions for the next, the future retreat participants.