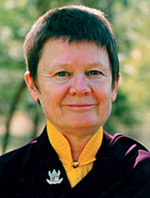 Pema Chödrön (formerly known as Deirdre Blomfield-Brown) is an ordained Buddhist nun in the Tibetan Vajrayana tradition, and a teacher in the lineage of Chögyam Trungpa. The goal of her work is the ability to apply Buddhist teachings in everyday life.

A prolific author, she has conducted workshops, seminars, and meditation retreats in Europe, Australia, and throughout North America. She is resident teacher of Gampo Abbey, a monastery in rural Cape Breton, Nova Scotia, Canada.

Pema Chödrön was born in or around 1936 in New York City. She attended Miss Porters School in Farmington, Connecticut and graduated from the University of California, Berkeley. She worked as an elementary school teacher in California and New Mexico before her conversion to Buddhism.

Following a second divorce, Chödrön began to study with Lama Chime Rinpoche in the French Alps. She became a Buddhist nun in 1974 while studying with him in London. She is a fully-ordained bhikṣuṇī in a combination of the Mulasarvastivadin and Dharmaguptaka lineages of vinaya, having received full ordination in Hong Kong in 1981 at the behest of the sixteenth Karmapa. She has been instrumental in trying to reestablish full ordination for nuns in the Mulasarvastivadin order, to which all Tibetan Buddhist monastics have traditionally belonged; various conferences have been convened to study the matter.

Ani Pema first met Chögyam Trungpa Rinpoche in 1972, and at the urging of Chime Rinpoche, she took him as her root guru ("Ani" is a Tibetan honorific for a nun). She studied with him from 1974 until his death in 1987. Trungpa Rinpoche's son, Sakyong Mipham Rinpoche, appointed Chödrön an acharya (senior teacher) shortly after assuming leadership of his father's Shambhala lineage in 1992.

Trungpa Rinpoche appointed Ani Pema director of the Boulder Shambhala Center (then Boulder Dharmadhatu) in Colorado in the early 1980s. It was during this period that she became ill with chronic fatigue syndrome. In 1984, Ani Pema moved to Gampo Abbey and became its director in 1986. There, she published her first two books to widespread critical acclaim. Her health gradually improved, she claims, with the help of a homeopath and careful attention to diet.

In late 2005, Pema Chödrön published No Time to Lose, a commentary on Shantideva's Guide to the Bodhisattva's Way of Life. Her most recent publication is Practicing Peace in Times of War. She is currently studying with Lama Dzigar Kongtrul Rinpoche, and spends seven months of each year in solitary retreat under his direction in Crestone, Colorado.

She continues to teach the traditional "Yarne" (rainy season) retreat for monastics at Gampo Abbey each winter. In recent years, she has spent the summers teaching on the Guide to the Bodhisattva's Way of Life in Berkeley. Pema was appointed by Sakyong Mipham Rinpoche as "acharya" (senior teacher) in California.

Her audio recordings include: