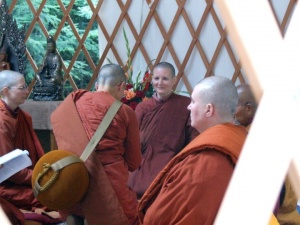 Phalanyani Daniela (Pali name: Phalañani), née, Daniela Doerpinghaus, later: El Aidi (b. 1959- ) is a former actress and comedian. She left the stage and audience some years ago to live a peaceful and quiet life in a small village in Spain.

On November 1, 2012 it was announced that Ayya Phalanyani would be the new head of Santi Forest Monastery in Australia. At the official website the announcement was:

Ayya Phalanyani has been asked by Ajahn Brahm to step into the position of leader of the Santi community and she, after careful consideration, has accepted this important role within the community.

This change will allow Santi to continue to develop and to move forward in a positive manner.

As Ayya Phalanyani advised "any change will be slow and carefully considered".

In June 2013 Ayya Phalanyani resigned from the post of Abbess. She is now residing at monasteries in Northeast Thailand.