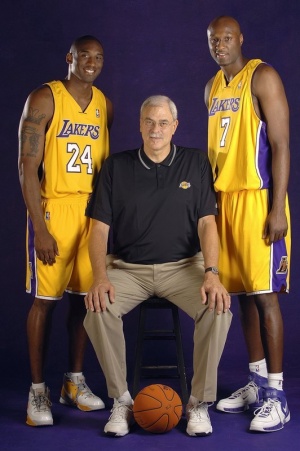 Philip Douglas "Phil" Jackson (born September 17, 1945 in Deer Lodge, Montana) is a former American professional basketball player and the current head coach of the Los Angeles Lakers. His reputation was established as head coach of the Chicago Bulls from 1989 through 1998; during his tenure, Chicago won six NBA titles. His next team, the Los Angeles Lakers, won three consecutive NBA titles from 2000-2002. In total, Jackson has won 11 NBA titles as a coach, which surpasses the long-standing record of 9 titles by Red Auerbach (who won 9 titles when there were about half as many teams to compete against).

Jackson is known for his use of Tex Winter's triangle offense as well as a holistic approach to coaching that is influenced by Buddhism, earning him the nickname "Zen Master". (Jackson cites Robert Pirsig's book Zen and the Art of Motorcycle Maintenance as one of the major guiding forces in his life. His fond admiration for the book is the source of his nickname "Zen Master.") He also applies Native American spiritual practices as documented in his book "Sacred Hoops." He is the author of several candid books about his teams and his basketball strategies. Jackson is also a recipient of the state of North Dakota's Roughrider Award. Jackson leads the 2007 class of the Basketball Hall of Fame. Jackson regularly attempts to alter his appearance so the media cannot use old photos of him for recent news, and, true to his word, as of September 2008, he was no longer sporting his illustrious, white mustache, which saw 9 NBA titles.

In 1999, as part of celebrations for the National Basketball Association's 50th anniversary, Jackson was named one of the 10 greatest coaches in league history. Phil Jackson won his record tenth title as a head coach on June 14, 2009 when the Los Angeles Lakers won 4 games to 1 over the Orlando Magic.

The holder of these records (especially the last one, most NBA titles period) arguably makes him the most successful basketball person in history. Phil Jackson broke the record for most NBA titles in 2009 and on June 17, 2010 he and the Los Angeles Lakers repeated as champions; breaking his own incredibly hard to reach NBA record.