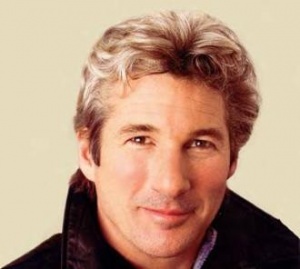 Richard Tiffany Gere (born August 31, 1949) is an American actor. He began acting in the 1970s, and came to prominence in 1980 for his role in the film American Gigolo, which established him as a leading man and a sex symbol. He went on to star in several hit films including An Officer and a Gentleman, Pretty Woman, Primal Fear, and Chicago, for which he won a Golden Globe Award as Best Actor, as well as a Screen Actors Guild Award as part of the Best Cast.

Gere was married to supermodel Cindy Crawford from 1991 to 1995. In 2002, he married actress Carey Lowell. They have a son, Homer James Jigme Gere, who was born in 2000 and is named after Gere's father.

Gere was raised by Methodist parents; his interest in Buddhism began when he traveled to Nepal in 1978 with the Brazilian painter, Sylvia Martins. He is a practicing Buddhist and an active supporter of the Dalai Lama. Gere is also a persistent advocate for human rights in Tibet; he is a co-founder of the Tibet House, creator of The Gere Foundation, and he is Chairman of the Board of Directors for the International Campaign for Tibet. Because he strongly supports the Tibetan Independence Movement, he is permanently banned from entering The People's Republic of China. Gere was banned as an Academy Award presenter in 1993 after he used the opportunity to condemn the Chinese government. In September 2007, Gere called for the boycott of the 2008 Beijing Olympic Games to put pressure on China to make Tibet independent. He starred in a politically themed pro-Tibet Lancia commercial featuring the Lancia Delta.

Gere campaigns for ecological causes and AIDS awareness. He currently serves on the Board of Directors for Healing the Divide, an organization that supports global initiatives to promote peace, justice and understanding, and he also actively supports Survival International, an organization dedicated to protecting the rights and lands of tribal peoples throughout the world. He helped to establish the AIDS Care Home, a residential facility in India for women and children with AIDS, and also supports campaigns for AIDS awareness and education that country. In 1999 he created the Gere Foundation India Trust to support a variety of humanitarian programs in India.

On April 15, 2007, Gere appeared at an AIDS awareness rally in Jaipur, India. During a live news conference to promote condom use among truck drivers, he affectionately embraced Bollywood superstar Shilpa Shetty, dipped her, and kissed her several times on the cheek. As a result of that gesture, a local court ordered the arrest of Gere and Shetty, finding them in violation "public obscenity" laws. Gere, who quickly fled the country, has said the controversy was "manufactured by a small hard-line political party." About a month later, a two-judge bench headed by the Chief Justice of India, KG Balakrishnan, described the case as "frivolous" and believed that such complaints (against celebrities) were filed for "cheap publicity" and have brought a bad name to the country. They ruled that "Richard Gere is free to enter the country. This is the end of the matter."

In June 2008, Gere appeared in a Fiat commercial for the European market, driving a new Lancia Delta from Hollywood to Tibet. The commercial concluded with a tagline of "New Lancia Delta: the power to be different". The commercial was reported in Chinese newspapers, and Fiat apologized to China. Branding expert John Tantillo argued that Fiat had foreseen the controversy the ad would cause and hoped to benefit from press coverage it would receive, labeling it a case of adpublitzing.