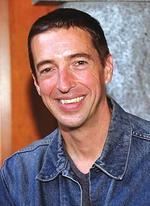 Ronald Prescott Reagan (born May 20, 1958 in Los Angeles, California), usually known as Ron Reagan, is the son of the former President of the United States Ronald Reagan and First Lady Nancy Reagan. He is currently a political pundit for the cable television network MSNBC, and was a talk show host and chief political analyst for KIRO radio in Seattle until his show was canceled on August 8, 2007. On September 8, 2008, The Ron Reagan Show made its debut as an Air America Media radio show; the program is now in the process of being expanded to a three hour daily show airing from 6–9 PM (ET) on the Air America network. He is notable for his liberal views despite being the son of a conservative icon.

Reagan lives in Seattle with his wife, Doria (née Palmieri), a clinical psychologist whom he married in 1980. They have no children.

Ron Reagan stated, in a 2004 New York Times interview, that he does not claim any religion, but that his sympathies are with Buddhism.

In a June 26, 2004 interview on Larry King Live, while discussing reasons why he would not run for political office, Ron Reagan stated "I'm an atheist... polls all say that, you know, people won't elect an atheist."