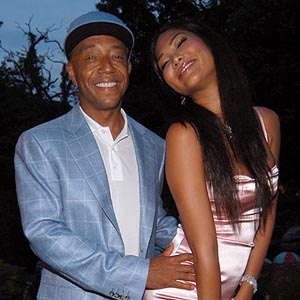 Russell Simmons has been vegan since 1998, and advocates the adoption of veganism citing animal rights along with the environmental and health benefits. He is also a Buddhist.

In January 2009 he was named Editor-In-Chief of GlobalGrind.com: The World According To Hip-Hop

Russell Simmons is the second richest figure in hip hop, having a net-worth estimate of $500 million, second only to Jay-Z's $547M and slightly ahead of 50 Cent with $440M and Sean Combs's $358M.

In the aftermath of Hurricane Katrina, Simmons joined 22 other top executives in the apparel and home fashions industry to form Fashion Delivers Charitable Foundation, Inc. to unify the apparel and home fashions industry to donate new product to help needy individuals and families who fell victim to one of the USA's worst natural disaster. In supporting the new charity, Phat Farm underwrote a t-shirt design contest with 100% of the proceeds going to Fashion Delivers.

In May 2009, Simmons was appointed Goodwill Ambassador for the Permanent Memorial at the United Nations to Honour the Victims of Slavery and the Transatlantic Slave Trade by UN Secretary-General Ban Ki-moon.

Simmons is also a supporter of the David Lynch Foundation for Consciousness-Based Education and World Peace, established to ensure that any child in America who wants to learn and practice meditation can do so.