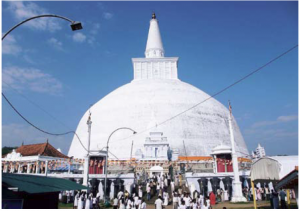 The Ruwanwelisaya (also written as Ruvanvalisaya) is a stupa in Sri Lanka, considered a marvel for its architectural qualities and sacred to many Buddhists all over the world. Simply known also as the Great Stupa, the Ruvanvalisaya was constructed by Dutthagamani after he became king in 161 BCE. This was his most ambitious project and it is said that one of the architects designed the dome to resemble a bubble of milk. Sadly, the king did not live to see the completion of the stupa.

The compound of the stupa is surrounded by four walls with elephant figures made into them. It is believed that relics of the Buddha are enshrined within the stupa. The Ruvanvalisaya was also designed with the teachings of the Buddha in mind. Its dome signifies the vastness of the doctrine, the four facets above it represent the Four Noble Truths, the concentric rings indicate the Noble Eightfold Middle Path, and the large crystal at the pinnacle represents the ultimate Buddhist goal of enlightenment.