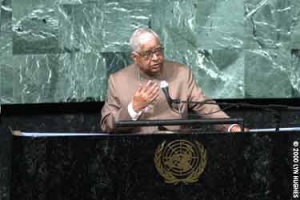 S. N. Goenka (1924-2013) is perhaps the most famous lay Buddhist in modern times. He was born a Hindu in Burma (of Indian descent) and learned vipassana from Sayagyi U Ba Khin after suffering many migraine headaches and other ailments. He was healed through his meditation practice and went on to be the founder of a worldwide vipassana retreat organization centered around a 10 day vipassana technique that now has courses on every continent except Antarctica. It is estimated that at least 100,000 students attend one of his 10 day retreat courses in the world each year, which began in the 1960s and continues today.

The technique which S. N. Goenka teaches represents a tradition that is traced back to the Buddha. Goenka emphasizes that, "The Buddha never taught a sectarian religion; he taught Dhamma; the way to liberation, which is universal" and presents his teachings as non-sectarian and open to people of all faiths or no faith. "Liberation" in this context means freedom from impurities of mind and, as a result of the process of cultivating a pure mind, freedom from suffering. Goenka calls Vipassana meditation an experiential scientific practice, through which one can observe the constantly changing nature of the mind and body at the deepest level, a profound understanding that leads to a truly happy and peaceful life.

Although Indian by descent, S. N. Goenka was born and raised in Burma. He was an industrialist until he had the good fortune to come into contact with U Ba Khin, and to learn the technique of Vipassana from him. After receiving training from his teacher for fourteen years, Mr. Goenka settled in India and began teaching Vipassana in 1969. In a country still sharply divided by differences of caste and religion, the courses offered by Mr. Goenka have attracted thousands of people from every part of society. In addition, many people from countries around the world have come to join courses in Vipassana meditation.

He was recently conferred the Padma Bhushan, the third highest civilian honor in India for social work on the occasion of India's 63rd republic day.

Goenka was also a prolific orator, writer and a poet. He wrote in English and Hindi languages. He traveled widely and lectured to audiences worldwide including at the World Economic Forum, Davos, and at the “Millennium World Peace Summit” at the United Nations in August, 2000. For four months in 2002, he undertook the Meditation Now Tour of North America.

He passed away peacefully at the ripe age of 89 just a few months before what would have been his 90th birthday at his residence on Sunday, 29th September, 2013 at 10:40 PM.