Difference between revisions of "Sangha" 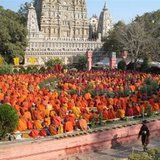 The Buddha mentions two sanghas – the monastic sangha and the noble sangha. The monastic sangha is of course the congregation of properly ordained monks and nuns. The noble sangha (ariya sangha or sometimes sàvaka sangha) is composed of all those who have attained the first stage of enlightenment or higher. However, in the broadest sense the saïgha is anyone, ordained or not, enlightened or not, who is fully committed to the Buddha’s teachings. The Buddha says, ‘Whoever is wise and confident, learned and upholding the Dhamma and living in accordance with it, they are called ‘Light of the Sangha.’ The monk who is virtuous, the nun who is learned, the lay man or lay woman who is full of faith, they are rightly called ‘Light of the Sangha’ (A.I,8).