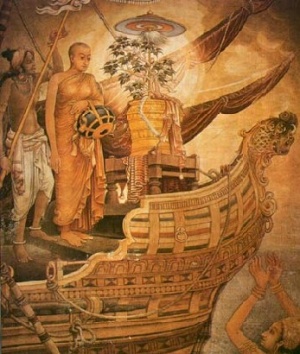 Sanghamitta (approx. 308 BCE - 229 BCE) was the daughter of King Ashoka. She was a nun who spread the Order to Sri Lanka and brought with her a sapling from the original Bodhi Tree at Bodh Gaya. This marked one of the key moments in the spread of Buddhism outside of India.

The tree sapling that she brought to Sri Lanka still survives to this day and is the oldest living tree with a known planting date (288 BCE).

She attained full enlightenment as an Arahant.

Sanghamitta and her brother, the Venerable Mahinda went to Sri Lanka to spread the teachings of Buddha at the request of King Devanampiya Tissa (250 BC – 210 BC) who was a contemporary of Emperor Ashoka (304 BC – 232 BC) of India. Ashoka was initially reluctant to send his daughter on an overseas mission. However, because of the insistence of Sanghamitta herself, he finally agreed. She was sent to Sri Lanka together with several other nuns to start the nun lineage of Bhikkhunis at the request of King Tissa of Sri Lanka to ordain queen Anulā and other women of Devānampiya Tissa's court at Anuradhapura in Sri Lanka who desired to be ordained as nuns after Mahinda converted them all to Buddhism.

After Sanghamitta's contribution to the propagation of Buddhism in Sri Lanka and her establishing the 'Bhikkhuni Sasana' or 'Meheini Sasna' (Order of Priestesses or Nuns) there, her name became synonymous with 'Buddhist Female Monastic Order of Theravada Buddhism' that was established not only in Sri Lanka but also in Burma, China and Thailand, in particular. The day the most revered tree, the Bodhi Tree, a sapling of which was brought by her to Sri Lanka and planted in Anuradhapura, and which is still surviving, is also celebrated every year on the Full Moon day of December as "Uduvapa Poya" or "Uposatha Poya" and "Sanghamitta Day" by Theravada Buddhists in Sri Lanka and other parts of the world.

Sanghamitta died at the age of 79 in the ninth year of the reign of King Uttiya at her residence in Hatthaloka Upasikaramaya Anuradhapura. Uttiya performed her last rites. The occasion was also marked with observances in her honour throughout Sri Lanka, for one week. She was cremated to the east of the Thūpārāma near the Cittasālā, in front of the Bodhi-Tree. The location for the cremation had been selected by the Therī herself before her death. A stupa was erected by Uttiya over her ashes.