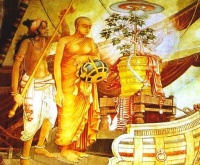 Sanhamitta Day honors the Arahant Ven. Sanghamitta (daughter of King Ashoka) for her travels to Sri Lanka to spread the Dhamma there and set-up the Bhikkhuni Order in Sri Lanka.

It occurs on the Full Moon day of December.

She came to Sri Lanka with a sapling of the Bodhi Tree, the same tree that the Buddha attained enlightenment under. It is the oldest living tree with a known planting date (288 BCE). See: Jaya Sri Maha Bodhi

Significance for Buddhists in modern times

Currently there are many holidays and celebrations in the Buddhist calendar, but in modern times not all of these can be celebrated. Some have been trimmed off the calendar, such as Uposatha days only on Full Moon days. To limit the number of celebrations further in perhaps a Modern Theravada way, some centers have limited it to the 6 major Buddhist holidays, including: Vesakha, the Kathina and Sanghamitta Day. In the spirit of recognizing the great contributions of female disciples to Buddhism, Sanghamitta Day should be considered one of the major holidays to be observed and it could be done in conjunction with Christmas in non-Buddhist countries.

Sanghamitta Day is especially relevant, not only to honor female practitioners, but because it represents one of the first major moments of Buddhist missionary work outside of India, an appropriate holiday for Buddhists in non-Buddhist lands. The use of the December 25 Christmas date may be additionally appropriate since Ven. Sanghamitta arrived in Sri Lanka with the 'gifts' of the Dhamma and the sapling of the original Bodhi Tree. The traditional gift exchanges during Christmas could remind Buddhists of the gifts Ven. Sanghamiita brought to Sri Lanka. For those who like Christmas trees, the tree could also represent the sapling of the Bodhi Tree she brought with her from India.