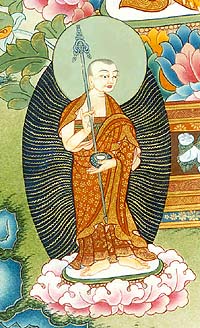 Sàriputta (Pali), Sariputra (Sanskrit) was one of the Buddha’s two chief disciples. He and his childhood friend Moggallana both became monks together under the teacher Sanjaya but eventually became disillusioned with him and his philosophy and then split up and went their separate ways looking for a better teacher.

One day Sàriputta heard about the Buddha’s Dhamma, converted and straight away went in search of his friend to tell him of the wonderful teaching he had discovered. When they met and Moggallàna heard the Dhamma, he too converted and then the two young men went to find the Buddha so they could be ordained as monks by him. In time the Buddha came to look upon Sàriputta and Moggallàna as his chief disciples and heirs.

Sàriputta’s forte was his ability to understand the most abstruse aspects of the Dhamma and expound it in a clear and comprehensible manner, so much so that the Buddha gave him the title of ‘General of the Dhamma.’ In one of his discourses he spoke of the qualities needed to be a good Dhamma teacher, qualities he himself possessed. ‘When one teaches another he should first establish five things within himself and then teach. What five? Let him think; “I will speak at the right time, not at the wrong time. I will speak about what is, not about what is not. I will speak with gentleness, not harshness. I will speak about the goal, not about what is not the goal. I will speak with a mind filled with love, not with a mind filled with ill-will.” First establish these five things and then teach another’ (A.III,195). This is one of a number of discourses by Sàriputta preserved in the Tipitaka. In Sri Lankan, Thai and Chinese temples the main statue of the Buddha is often flanked by two smaller statues, one of Sàriputta and the other of Moggallàna.

Great Disciples of the Buddha, Nyanaponika and Hellmuth Hecker, 1997.