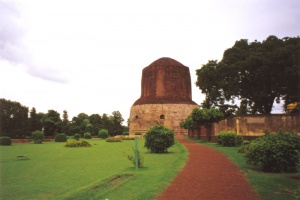 Dhamek Stupa, marking the spot of the Buddha's first discourse

Sàrnàth is a small village on the outer edge of the city of Vàrànasi in northern India and is the place where the Buddha first proclaimed his Dhamma to the world.

The name Sàrnàth is a recent one and is derived from the term 'lord of the deer' or 'Deer Park'. At the time of the Buddha, the place was a wildlife reserve called Isipatana. In the centuries after the Buddha Sàrnàth grew into a great center of culture and learning. Today the ruins of Sàrnàth cover a wide area and a museum on the site houses a large collection of artifacts found there.

The Dhamek Stupa in Sarnath marks the spot of the Buddha's first discourse to the five ascetics. The stupa pictured above was built in approxrimately 500 CE, to replace the original which was most likely was built by Ashoka.

It is considered one of the four most important places to visit for Buddhist pilgrimage.