The Satipaṭṭhāna Sutta and the Mahāsatipaṭṭhāna Sutta are two of the most popular discourses in the Pali Canon, embraced by both Theravada and Mahayana practitioners (see, for example, Thich Nhat Hanh, 2005). (These two discourses are identical except that the latter includes extended exposition regarding mindfulness of The Four Noble Truths).

These discourses (Pāli: sutta) provide a means for practicing mindfulness in a variety of contexts and potentially continuously. It is the primary instructions given for meditation by the Buddha. Famously, the Buddha declares at the beginning of this discourse:

"This is the one and only way (or direct way) [Pāli: ekāyano ... maggo], monks, for the purification of beings, for the overcoming of sorrow and lamentation, for the extinguishing of suffering and grief, for walking on the path of truth, for the realization of nibbāna...." (Vipassana Research Institute, 1996, pp. 2, 3.) 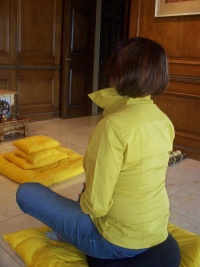 This sutta gives instructions to sit cross-legged, however other postures are mentioned and acceptable

The meditation techniques identified in this sutta can be practiced individually or in tandem.

Location of the Sutta

The Four Foundations of Mindfulness, also called the Four Frames of Reference are also mentioned in the Samyutta Nikaya at SN 47.6 & SN 47.7. Since the teachings are found in the first four Nikayas and repeated in more than one place, the teachings can be considered one of the oldest and Buddhavacana. The Mahayana Chinese version of the scriptures contains a similar version of the Satipatthana Sutta, as well.

In post-canonical Pali literature, the classic commentary on the Satipaṭṭhāna Sutta (as well as for the entire Majjhima Nikaya) is found in Buddhaghosa's Papañcasudani (Bullitt, 2002; Soma, 2003).

In this sutta, the Buddha identifies four references for establishing mindfulness (satipatthana): body, sensations (or feelings), mind (or consciousness) and mental contents. These are then further broken down into the following sections and subsections:

According to Analāyo (2006, pp. 24-25) and Soma (2003, pp. xxii - xxiv), the Papañcasudani recommends a different satipaṭṭhāna depending on whether a person:

Based on these two dimensions the commentary's recommended personality-based satipaṭṭhāna is reflected in the grid below.

Ven. Soma (in his Dhamma book on this Sutta, 2003, p. xxiv) adds that all practitioners (regardless of their character and temperament) should also practice mindfulness of Postures (moving, standing, sitting, lying down) and Clear Understanding, about which he writes: "The whole practice of mindfulness depends on the correct grasp of the exercises included in the two parts referred to here."