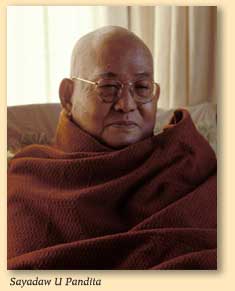 Listen to this human-read article
http://www.dhammawiki.com/uploads/Sayadaw_U_Pandita_article.mp3
Not working? Download this player

Sayadaw U Pandita (b. July 29, 1921; also known as Ovādacariya Sayādaw U Paṇḍitābhivaṃsa) is one of the foremost living masters of Vipassana meditation in the Burmese Theravada Buddhist tradition. A successor to the late Mahasi Sayadaw, he has taught many of the Western teachers and students of the Mahāsi style of Vipassana meditation. He is the abbot of Paṇḍitārāma Meditation Center in Yangon, Burma.

U Pandita was born in 1921 in the greater Yangon area in Burma. He became a novice at age twelve, and ordained at age twenty. After decades of study, he passed the rigorous series of government examinations in the Theravada Buddhist texts, gaining the Dhammācariya (Dhamma teacher) degree in 1952.

U Pandita began practicing Vipassana under the guidance of the Mahāsi Sayādaw beginning in 1950. In 1955, he left his position as a teacher of scriptural studies to become a meditation teacher at the Mahāsi Meditation Center.

U Pandita became well-known in the West after conducting a retreat in the spring of 1984 at the Insight Meditation Society (IMS) in Barre, Massachusetts in the United States. Many of the senior Western meditation teachers in the Mahāsi tradition practiced with U Pandita at that and subsequent retreats. The talks he gave in 1984 at IMS were compiled as the book "In This Very Life."

As of 2005, he continues to lead retreats and give Dhamma talks, but rarely conducts interviews himself.

A complete biography by Thāmanay Kyaw is available at http://vmc128.8m.com/contents/index.html under the title "One Life's Journey".

U Pandita is known for teaching a rigorous and precise method of self-examination. He teaches Satipaṭṭhāna or Vipassana meditation, emphasizing sīla or moral discipline as a requisite foundation. He is also an erudite scholar of the Pāli Tipiṭaka or Theravāda Buddhist canon.

On The Path to Freedom available as a free e-book in PDF format at http://www.buddhanet.net/pdf_file/path-free.pdf