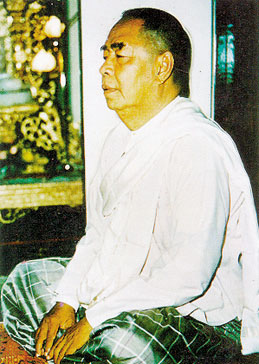 Sayagyi U Ba Khin (March 6, 1899 – January 19, 1971) was a senior civil servant in the newly independent Burmese administration (1948) who played an important role in the propagation of the Buddha Dhamma during the latter part of the twentieth century.

U Ba Khin was born in Rangoon, Burma. In March 1917, he passed the final high school examination, winning a gold medal as well as a college scholarship. Family pressures forced him to discontinue his formal education to start earning money. His first job was with a Burmese newspaper called The Sun, but after some time he began working as an accounts clerk in the office of the Accountant General of Burma. In 1926 he passed the Accounts Service examination, given by the provincial government of India. In 1937, when Burma was separated from India, he was appointed the first Special Office Superintendent. In that same year (1 January 1937?) U Ba Khin met Saya Thetgyi, a wealthy farmer who taught him anapana-sati a form of meditation taught by the Buddha. When Sayagyi tried it, he experienced good concentration, which impressed him so much that he resolved to complete a full course in meditation that Saya Thetgyi offered at a center he had established for that purpose. Accordingly, U Ba Khin applied for a ten-day leave of absence and set out for Saya Thetgyi's teaching center. Sayagyi progressed well during this first ten-day course, and continued his practise during frequent visits to his teacher's center and meetings with Saya Thetgyi whenever he came to Rangoon.

In 1941, a seemingly happenstance incident occurred which was to be important in Sayagyi's life. While on government business in upper Burma, he met by chance Webu Sayadaw, a highly respected monk who was widely recongized as an arahant. Webu Sayadaw was impressed with U Ba Khin's proficiency in meditation, and urged him to teach. He was the first person to exhort Sayagyi to start teaching.

On 4 January 1948, the day Burma gained independence, Sayagyi was appointed first Accountant General of the Union of Burma.

In 1950 he founded the Vipassana Association of the Accountant General's Office where lay people, mainly employees of that office, could learn Vipassana. In 1952, the International Meditation Centre (I.M.C.) was opened in Rangoon, two miles north of the famous Shwedagon pagoda. Here many Burmese and foreign students had the good fortune to receive instruction in the Dhamma from Sayagyi. Sayagyi was active in the planning for the Sixth Buddhist Council known as Chaṭṭha Saṅgāyana (Sixth Recitation) which was held in 1954-56 in Rangoon.

Sayagyi U Ba Khin made a determined effort to travel to the west to teach Vipassana there. This is evident from his correspondence with Dr Wright of the USA whom he had authorised to teach there and from his personal correspondence with other students. Due to travel restriction in place at that time, he was never able to fulfil his wish.

It was Sayagyi U Ba Khin's wish that the technique, long lost to India, could again return to its country of origin. For many reasons he could never come to India. He then authorized his student, S. N. Goenka, to teach Vipassana meditation. Sayagyi finally retired from his outstanding career in government service in 1967. From that time, until his death in 1971, he stayed at I.M.C., teaching Vipassana.