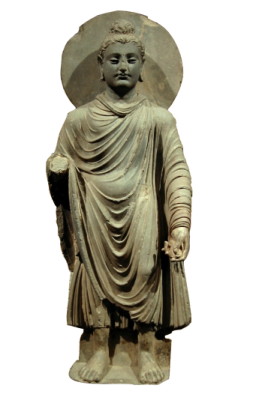 Representation of the Buddha in the Greco-Buddhist art of Gandhara, 1st century CE

A modern wood and mirrored glass Buddha sculpture from Thailand, at the Maha Bodhi Las Vegas, 7 ft. (2.13 m) in height

Sculptures in Buddhism have been popular for representing the Buddha and his teachings from an early date and especially in modern times.

Buddhist art originated on the Indian subcontinent following the historical life of Buddha, 6th to 5th century BCE, and thereafter evolved by contact with other cultures as it spread throughout Asia and the world.

A common misconception is that the Buddha did not allow statues, sculptures or stupas and this was a later innovation. This is not correct. The Buddha advised that stupas should be done.

King Ashoka is said to have erected 84,000 stupas honoring the Buddha and the Dhamma. He gazed for one full week at the Bodhi Tree. Considering this we can say with certainty that he must have built one in Bodh Gaya honoring the spot of enlightenment, i.e., the Maha Bodhi Temple stupa.

Early Buddhist art followed one Indian aniconic tradition, which avoids direct representation of the human figure. Around the 1st century CE an iconic period emerged lasting to this day which represents the Buddha in human form.

Buddhist art followed believers as the Dhamma spread, adapted, and evolved in each new host country. It developed to the north through Central Asia and into Eastern Asia to form the Northern branch of Buddhist art, and to the east as far as Southeast Asia to form the Southern branch of Buddhist art. In India, Buddhist art flourished and even influenced the development of Hindu art, until Buddhism nearly disappeared in India around the 10th century due in part to the vigorous expansion of Islam alongside Hinduism.

Anthropomorphic representations of the Buddha started to emerge from the 1st century CE in northern India. The two main centers of creation have been identified as Gandhara in today’s North West Frontier Province , in Pakistan, and the region of Mathura, in central northern India.

The art of Gandhara benefited from centuries of interaction with Greek culture since the conquests of Alexander the Great in 332 BCE and the subsequent establishment of the Greco-Bactrian and Indo-Greek Kingdoms, leading to the development of Greco-Buddhist art. Gandharan Buddhist sculpture displays Greek artistic influence, and it has been suggested that the concept of the "man-god" was essentially inspired by Greek mythological culture. Artistically, the Gandharan school of sculpture is said to have contributed wavy hair, drapery covering both shoulders, shoes and sandals, acanthus leaf decorations, etc.

The art of Mathura tends to be based on a strong Indian tradition, exemplified by the anthropomorphic representation of divinities such as the Yaksas, although in a style rather archaic compared to the later representations of the Buddha. The Mathuran school contributed clothes covering the left shoulder of thin muslin, the wheel on the palm, the lotus seat, etc.

Mathura and Gandhara also strongly influenced each other. During their artistic florescence, the two regions were even united politically under the Kushans, both being capitals of the empire. It is still a matter of debate whether the anthropomorphic representations of Buddha was essentially a result of a local evolution of Buddhist art at Mathura, or a consequence of Greek cultural influence in Gandhara through the Greco-Buddhist syncretism.

This iconic art was characterized from the start by a realistic idealism, combining realistic human features, proportions, attitudes and attributes, together with a sense of perfection and serenity reaching to the divine. This expression of the Buddha as a both a man and a god became the iconographic canon for subsequent Buddhist art.

Buddhist art continued to develop in India for a few more centuries. The pink sandstone sculptures of Mathura evolved during the Gupta period (4th to 6th century) to reach a very high fineness of execution and delicacy in the modeling. The art of the Gupta school was extremely influential almost everywhere in the rest of Asia. By the 10th century, Buddhist art creation was dying out in India, as Hinduism and Islam ultimately prevailed.

As Buddhism expanded outside of India from the 1st century CE, its original artistic package blended with other artistic influences, leading to a progressive differentiation among the countries adopting the faith.

Great artistic skill is used in making the statues and the use of beautiful statues and other artistic forms in Buddhist temples is at least skilful means, for the understanding of Buddhism and the wholesome representation of the teacher and teachings at its best.