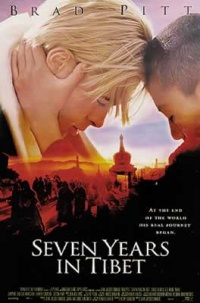 Seven Years in Tibet is a 1997 film based on the book of the same name written by Austrian mountaineer Heinrich Harrer based on his experiences in Tibet between 1944 and 1951 during the Second World War, the interim period, and the Chinese People's Liberation Army's invasion of Tibet in 1950. The film was directed by Jean-Jacques Annaud and starred Brad Pitt and David Thewlis. The score was composed by John Williams and features cellist Yo-Yo Ma.

Seven Years in Tibet tells the story of how Austrians Heinrich Harrer and Peter Aufschnaiter, having been imprisoned by the British while mountaineering in the north of India at the beginning of World War II in 1939, eventually escape across the border into Tibet in 1944 and cross the treacherous high plateau. There in Tibet, after initially being ordered to return to India, they are welcomed at Lhasa and become acquainted with an unfamiliar way of life. Harrer is introduced to the Dalai Lama, who is still a boy, and he becomes a tutor and during their time together Heinrich becomes a close friend to the young spiritual leader during his time in Lhasa. Harrer and Aufschnaiter stay in the country until the Chinese invasion in 1950.

The introduction shows the young Dalai Lama receiving gifts from Tibetan monks. One gift he receives, an ornate music box, has special meaning to him, as he is still a young child.

The progress of Heinrich Harrer through India and Tibet on his trek across the high plateau to Lhasa is interwoven with the story of the young Dalai Lama growing into an 8 year old boy who becomes the spiritual leader of Tibet, with a thirst for western knowledge and later into an adolescent. The Dalai Lama is portrayed by three different actors as he grows up.

Harrer (Brad Pitt) and his pregnant wife Ingrid (Ingeborga Dapkunaite) are briefly shown being driven to the train station in Graz, for Harrer's departure on an expedition to Nanga Parbat. It becomes evident that Ingrid resents his departure. At the station, Harrer barges through the crowds, dragging his wife by the hand and showing his resentment of Peter Aufschnaiter's selection as leader of the expedition.

Harrer at the train station in 1939 appears hostile to the Nazi Party, taking their flag with reluctance. The real-life Heinrich Harrer admitted he had Nazi sympathies at the time which he later regretted. Harrer's arrogance and self-sufficiency become apparent as he sits by himself on the train journey to India.