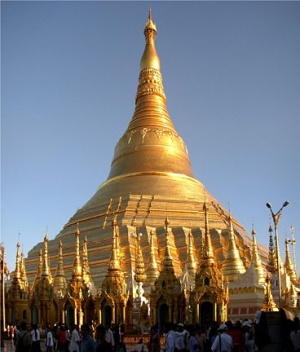 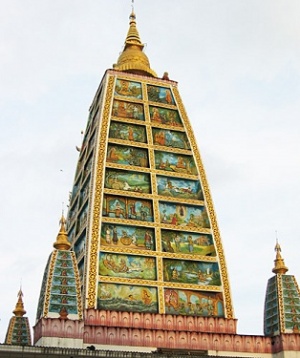 The Shwedagon Pagoda also known as the Golden Pagoda, is a 98-metre (approx. 321.5 feet) gilded stupa located in Yangon, Burma. The pagoda lies to the west of Kandawgyi Lake, on Singuttara Hill, thus dominating the skyline of the city. It is the most sacred Buddhist pagoda for the Burmese with relics of the past four Buddhas enshrined within, namely the staff of Kakusandha, the water filter of Konagamana, a piece of the robe of Kassapa and eight hairs of Gotama, the historical Buddha.

According to legend, the Shwedagon Pagoda is 2500 years old. Archaeologists believe the stupa was actually built sometime between the 6th and 10th centuries by the Mon, but this is a very controversial issue because according to the records by Buddhist monks it was built before Lord Buddha died in 486 BC. The story of Shwedagon Pagoda begins with two merchant brothers, Taphussa and Bhallika, from the land of Ramanya, meeting the Buddha and receiving eight of the Buddha's hairs to be enshrined in Burma. The two brothers made their way to Burma and with the help of the local king, King Okkalapa, found Singuttara Hill, where relics of other Buddhas preceding Gotama Buddha had been enshrined.

The stupa fell into disrepair until the 1300s when the Mon king Binnya U of Bago had the stupa rebuilt to a height of 18 meters (60 ft). It was rebuilt several times and reached its current height of 98 meters (320 ft) in the 15th century. The Mon kingdom possessed two great pagodas of especial sanctity, the Shwemawdaw at Bago and the Shwedagon. Originally only twenty-seven feet high, it was raised to a height of sixty-six feet in 1362 by King Binnya U as an act of special piety. Dhammazedi's immediate predecessor, his mother-in-law Queen Shinsawbu (1453-72), raised its height to 40 meters (129 ft). She terraced the hill on which it stands, paved the top terrace with flagstones, and assigned land and hereditary slaves for its maintenance. When in 1472 she yielded up the throne to Dhammazedi, she retired to Dagon, and during her last illness had her bed placed so that she could rest her dying eyes upon the gilded dome of the sacred fane. The Mon face of the Shwe Dagon inscription catalogues a list of repairs beginning in 1436 and finishing during Dhammazedi's reign. It mentions Queen Shinsawbu under a terrific Pali name of sixty-six letters. By the beginning of the sixteenth century the pagoda had become the most famous place of pilgrimage in Burma. 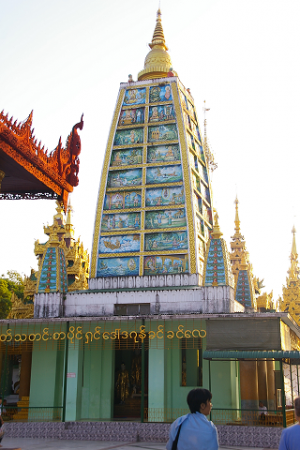 A series of earthquakes during the next centuries caused damage. The worst damage came from a 1768 earthquake that brought down the top of the stupa and it was raised to its current state by King Hsinbyushin (lit. Lord of the White Elephant) of Konbaung Dynasty. A new hti or crown was donated by King Mindon Min in 1871 after the annexation of Lower Burma by the British.

An earthquake of moderate intensity in October 1970 put the shaft of the hti visibly out of alignment. A scaffold was erected and extensive repairs to the hti were made.

There are four entrances (mouk) to the Paya that lead up a flight of steps to the platform (yin byin) on Singuttara Hill. The eastern and southern approaches have vendors selling books, good luck charms, Buddha images, candles, gold leaf, incense sticks, prayer flags, streamers, miniature umbrellas and flowers. A pair of giant chinthe (leogryphs, mythical lions) guard the entrances and the image in the shrine at the top of the steps from the south is that of the second Buddha, Konagamana. The base or plinth of the stupa is made of bricks covered with gold plates. Above the base are terraces (pyissayan) that only monks and men can access. Next is the bell-shaped part (khaung laung bon) of the stupa. Above that is the turban (baung yit), then the inverted almsbowl (thabeik), inverted and upright lotus petals (kya hmauk kya hlan), the banana bud (nga pyaw bu) and then the crown. The crown or umbrella (hti) is tipped with 5,448 diamonds and 2,317 rubies. The very top, the diamond bud (sein bu) is tipped with a 76 carat (15 g) diamond.

The Gold seen on the stupa is made of genuine gold plates, covering the brick structure attached by traditional rivets. Myanmar people all over the country, as well as monarchs in its history,have donated gold to the pagoda to maintain it. It was started in the 15th century by the Mon Queen Shin Sawbu who gave her weight in gold and continues to this day.

At the Shwedagon Pagoda complex there is a Maha Bodhi Temple style replica, known as Mahabodhi Paya. It was constructed in the year 1250 CE. It is one of only a few replicas of the Maha Bodhi Temple in the world.