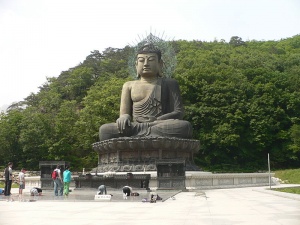 A bronze Buddha statue at Sinheungsa

Sinheungsa, sometimes spelled Shinheungsa, is a head temple of the Jogye Order of Korean Buddhism. It is situated on the slopes of Seoraksan in Sokcho, Gangwon Province, South Korea. Historical accounts vary as to whether this ancient Zen (Seon) temple was first constructed by Jajang in 653, first called Hyangseongsa (Temple of Zen Buddhism), or in 637 following his return from Tang China. It burned to the ground in 699, was rebuilt in 710, burned again in 1645 and was rebuilt in 1648 at its present location by Uisang. This temple is believed to be the oldest Zen (Seon) temple in the world.

The temple is located in Seoraksan National Park, and many tourists pass by on their way to the high rocks of Ulsanbawi. Other temples named Sinheungsa are located in Seoul, Samcheok and Icheon.