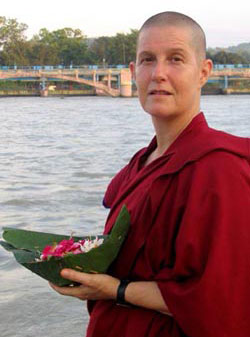 Ven. Sister Dhammadinna took robes in 1983 in the Theravada tradition after earning a science degree at U. Mass. She then moved to Burma with her teacher and remained in Asia for 21 years, studying with U Pandita Sayadaw and Ajahn Buddhadasa, among others, walking daily alms rounds, living a simple, monastic life and meditating in the forests and temples of Burma and Thailand.

For a number of years, Ven. Dhammadinna has taught Buddhism and led meditation retreats at Suan Mokkh in South Thailand as well as in England, India, and the US. In 2000 she was sent by her Burmese master to Dharmsala to study with His Holiness the Dalai Lama privately. In 2003 Ven. Dhammadinna took ordination in the Tibetan tradition with His Holiness and, at His request, received bhikshuni ordination in Taiwan.