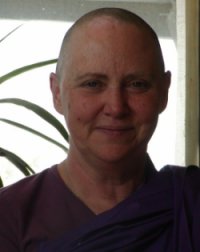 Sister Khanti Khema is an American woman who decided one day to find out what the Buddha actually did about suffering by surrendering to a total immersion program of training through Buddhist teachings. Training with a very respected teacher and doing the experiment of personal investigation for herself was the advice of some Bangladeshi elders she consulted before starting! Having spent three years in Asia in a Karate dojo when she was younger, this was not such an unusual request to take on one teacher for the perfection of one specific skill for whatever time it takes to learn it. “They told me to keep going, not to stop until I got it.” She also knew what that meant having previously owned an employment agency business for 14 years and having had three children helped her persistence.

The year 2007 will mark in April seven years of study with the same teacher and over five years of fulltime pursuit to discover what the Buddha did, how he did it, what his teachings actually were, and whether the instructions are still here to do the same investigation today. The other important point was whether or not you can use this practice today and make a difference in daily life. How relevant is it today?

September 7, 2006 marks the date of having totally left society for her first novice ordination. After 2 years of 8 precepts in place while studying that date marks a big first step by committing to 10 precepts. Her hope is to find other women who would dare to do a similar search and experiment in a supported deep forest environment and be willing to start an American Buddhist Forest Nuns Tradition at Dhamma Sukha Meditation Center with her teacher as the Spiritual head.

Her ordination on September 7, 2006 was a hallmark for American Buddhism because the ceremony was officiated by an American Maha Thera Buddhist Monk. This was the first such ordination in America where an American woman took the Samaneri vows with an American monk presiding. Up til now, if a woman wanted to do this they would have to go to a foreign monastery on American soil. But now there is an American Monastery where women and men can be trained in an ordination program for a new American Buddhist Forest Tradition. The tradition follows the Suttas closely and the Vinaya very precisely. This is especially good news for those abroad in robes who wish to come home to this country to live in an Buddhist center that speaks English, supports the vinaya and offers a study campus to continue their work with sutta study and developing compassionate service projects.