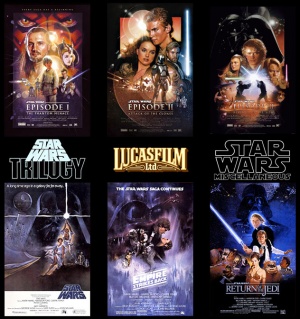 Star Wars is an epic space opera franchise conceived by George Lucas. The first film in the franchise was originally released on May 25, 1977, by 20th Century Fox, and became a worldwide pop culture phenomenon, spawning two immediate sequels, released at three-year intervals. Sixteen years after the release of the trilogy's final film, the first in a new prequel trilogy of films was released, again released at three-year intervals, with the final film released on May 19, 2005.

As of 2008, the overall box office revenue generated by the six Star Wars films has totaled approximately $4.3 billion, making it the third-highest-grossing film series, behind only the James Bond and Harry Potter films.

The Star Wars film series has spawned other media including books, television series, video games, and comic books. These supplements to the film trilogies comprise the Star Wars Expanded Universe, and have resulted in significant development of the series' fictional universe. These media kept the franchise going in the interim between the film trilogies. In 2008, Star Wars: The Clone Wars was released to theaters as the first ever worldwide theatrical Star Wars film outside of the main trilogies. It was the franchise's first animated film, and was intended as an introduction to the Expanded Universe series of the same name, a 3D CGI animated series based on a previous 2D animated series of a similar name.

The events depicted in Star Wars media take place in a fictional galaxy. Many species of alien creatures (often humanoid) are depicted. Robotic droids are also commonplace and are generally built to serve their owners. Space travel is common, and many planets in the galaxy are members of a Galactic Republic, later reorganized as the Galactic Empire.

One of the prominent elements of Star Wars is the "Force", which is an omnipresent form of energy which can be harnessed by those with that ability. It is described in the first produced film as "an energy field created by all living things [that] surrounds us, penetrates us, [and] binds the galaxy together." The Force allows users to perform a variety of supernatural feats (such as telekinesis, clairvoyance, precognition, and mind control) and also can amplify certain physical traits, such as speed and reflexes; these abilities can vary from user to user and can be improved through training. While the Force can be used for good, it has a dark side that, when pursued, imbues users with hatred, aggression, and malevolence. The six films feature the Jedi, who use the Force for good, and the Sith, who use the dark side for evil in an attempt to take over the galaxy. In the Expanded Universe many dark side users are Dark Jedi rather than Sith, mainly because of the Rule of Two.

The Dhamma of Star Wars

A book has been written with the title, "The Dharma of Star Wars" to outline the many Dhammic references in the set of six movies that make up the two trilogies.