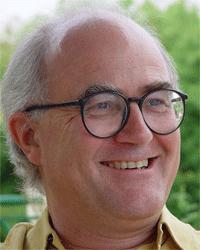 Stephen Batchelor is is a contemporary Buddhist teacher and writer, best known for his secular or agnostic approach to Buddhism. Through his writings, translations and teaching, Stephen engages in a critical exploration of Buddhism's role in the modern world. He has co-led journeys with Shantum Seth and Buddhapath for Tricycle, the Buddhist magazine.

Stephen Batchelor was born in Dundee, Scotland, on April 7, 1953. He grew up in a humanist environment with his mother Phyllis (b. 1913) and brother David (b. 1955) in Watford, north west of London. After completing his education at Watford Grammar School, he travelled overland to India in February 1972, at the age of eighteen.

He settled in Dharamsala, the capital-in-exile of the Dalai Lama, and studied at the Library of Tibetan Works and Archives with Ven. Geshe Ngawang Dhargyey. He was ordained as a novice Buddhist monk in 1974. He left India in 1975 in order to study Buddhist philosophy and doctrine under the guidance of Ven. Geshe Rabten, at the Tibetan Monastic Institute in Rikon, Switzerland and at Le Mont Pelerin, Switzerland. He lived in Germany and South Korea and traveled extensively in Japan, China and Tibet.

He disrobed in February 1985 and married Martine Fages in Hong Kong before returning to England and joining the Sharpham North Community in Totnes, Devon. From 1990 he has been a Guiding Teacher at Gaia House meditation centre in Devon and since 1992 a contributing editor of Tricycle: The Buddhist Review.

In August 2000, he and Martine moved to Aquitaine, France, where they live in a small village near Bordeaux with their cat Alex. While at home he pursues his work as a scholar, writer and artist. He is the translator and author of various books and articles on Buddhism including the bestselling Buddhism Without Beliefs (Riverhead 1997). His most recent publication is Living with the Devil: A Meditation on Good and Evil (Riverhead, 2004). He is currently writing a novel on the Buddha's life based on canonical and commentarial materials in Pali.