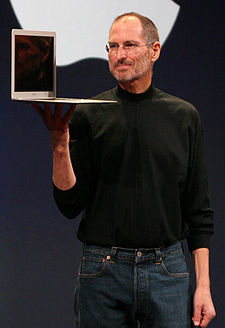 Steven Paul Jobs (February 24, 1955 - October 5, 2011) is an American businessman and co-founder, Chairman, and CEO of Apple Inc. Jobs is the former CEO of Pixar Animation Studios.

In the late 1970s, Jobs, with Apple co-founder Steve Wozniak, created one of the first commercially successful personal computers. In the early 1980s, Jobs was among the first to see the commercial potential of the mouse-driven graphical user interface. After losing a power struggle with the board of directors in 1985, Jobs resigned from Apple and founded NeXT, a computer platform development company specializing in the higher education and business markets. NeXT's subsequent 1997 buyout by Apple Computer Inc. brought Jobs back to the company he co-founded, and he has served as its CEO since then. Steve Jobs was listed as Fortune Magazine's Most Powerful Businessman of 2007.

In 1986, he acquired the computer graphics division of Lucasfilm Ltd which was spun off as Pixar Animation Studios. He remained CEO and majority shareholder until its acquisition by the Walt Disney Company in 2006. Jobs is currently the Walt Disney Company's largest individual shareholder and a member of its Board of Directors. He is considered a leading figure in both the computer and entertainment industries.

Jobs' history in business has contributed greatly to the myths of the idiosyncratic, individualistic Silicon Valley entrepreneur, emphasizing the importance of design and understanding the crucial role aesthetics play in public appeal. His work driving forward the development of products that are both functional and elegant has earned him a devoted following.

Jobs traveled to India with a Reed College friend (and, later, the first Apple employee), Daniel Kottke, in search of spiritual enlightenment. He came back a Buddhist with his head shaved and wearing traditional Indian clothing (not required in Buddhism, see: Clothes & fashion. During this time, Jobs experimented with psychedelics, calling his LSD experiences "one of the two or three most important things [he had] done in [his] life." He has stated that people around him who did not share his countercultural roots could not fully relate to his thinking

Jobs married Laurene Powell, on March 18, 1991. Presiding over the wedding was the Zen Buddhist monk Kobun Chino Otogowa. The couple have three children. Jobs also has a daughter, Lisa Brennan-Jobs (born 1978), from his relationship with Bay Area painter Chrisann Brennan. She briefly raised their daughter on welfare when Jobs denied paternity, claiming that he was sterile; he later acknowledged paternity. Lisa Brennan-Jobs is a journalist who wrote for The Harvard Crimson, and Apple's Lisa Computer was named for her.

In the unauthorized biography The Second Coming of Steve Jobs, author Alan Deutschman reports that Jobs once dated Joan Baez. Deutschman quotes Elizabeth Holmes, a friend of Jobs from his time at Reed College, as saying she "believed that Steve became the lover of Joan Baez in large measure because Baez had been the lover of Bob Dylan." In another unauthorized biography, iCon: Steve Jobs by Jeffrey S. Young & William L. Simon, the authors suggest that Jobs might have married Baez, but her age at the time (41) meant it was unlikely the couple could have children. Baez included a mention of Jobs in the acknowledgments of her 1987 memoir And A Voice To Sing With.

Steve Jobs is also a devoted Beatles fan. He has referenced them on more than one occasion at Keynotes and also was interviewed on a showing of a Paul McCartney concert. When asked about his business model on 60 Minutes, he replied: “ My model for business is The Beatles: They were four guys that kept each other's negative tendencies in check; they balanced each other. And the total was greater than the sum of the parts. Great things in business are not done by one person, they are done by a team of people. ”

In 1982, Jobs bought an apartment in The San Remo, an apartment building in New York City with a politically progressive reputation, where Demi Moore, Steven Spielberg, Steve Martin, and Princess Yasmin Aga Khan, daughter of Rita Hayworth, also had apartments. With the help of I.M. Pei, Jobs spent years renovating his apartment in the top two floors of the building's north tower, only to sell it almost two decades later to U2 frontman Bono. Jobs had never moved in.

In 1984, Jobs purchased a 17,000-square-foot (1,600 m2), 14 bedroom Spanish Colonial mansion, designed by George Washington Smith in Woodside, California, also known as Jackling House. Although it reportedly remained in an almost unfurnished state, Jobs lived in the mansion for ten years. According to reports, he kept an old BMW motorcycle in the living room, and let Bill Clinton use it in 1998. He allowed the mansion to fall into a state of disrepair, planning to demolish the house and build a smaller home on the property; but he met with complaints from local preservationists over his plans. In June 2004, the Woodside Town Council gave Jobs approval to demolish the mansion, on the condition that he advertise the property for a year to see if someone would move it to another location and restore it. A number of people expressed interest, including several with experience in restoring old property, but no agreements to that effect were reached. Later that same year, a local preservationist group began seeking legal action to prevent demolition. In January 2007 Jobs was denied the right to demolish the property, by a court decision.

He usually wears a black long-sleeved mock turtleneck made by St. Croix, Levi's 501 blue jeans, and New Balance 992 sneakers. He is a Buddhist and a vegetarian.

Jobs battled pancreatic cancer for many years. He passed away on October 5, 2011. In a statement, Jobs' family said he died peacefully surrounded by his family. In a speech in 2005 at Stanford University, he stated:

When I was 17, I read a quote that went something like: "If you live each day as if it was your last, someday you'll most certainly be right." It made an impression on me, and since then, for the past 33 years, I have looked in the mirror every morning and asked myself: "If today were the last day of my life, would I want to do what I am about to do today?" And whenever the answer has been "No" for too many days in a row, I know I need to change something.

Remembering that I'll be dead soon is the most important tool I've ever encountered to help me make the big choices in life. Because almost everything — all external expectations, all pride, all fear of embarrassment or failure - these things just fall away in the face of death, leaving only what is truly important. Remembering that you are going to die is the best way I know to avoid the trap of thinking you have something to lose. You are already naked. There is no reason not to follow your heart.

No one wants to die. Even people who want to go to heaven don't want to die to get there. And yet death is the destination we all share. No one has ever escaped it. And that is as it should be, because Death is very likely the single best invention of Life. It is Life's change agent. It clears out the old to make way for the new. Right now the new is you, but someday not too long from now, you will gradually become the old and be cleared away. Sorry to be so dramatic, but it is quite true.

Your time is limited, so don't waste it living someone else's life. Don't be trapped by dogma — which is living with the results of other people's thinking. Don't let the noise of others' opinions drown out your own inner voice. And most important, have the courage to follow your heart and intuition. They somehow already know what you truly want to become. Everything else is secondary.