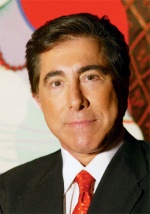 Stephen Alan Wynn (born January 27, 1942 in New Haven, Connecticut) is an American casino resort developer who is credited with spearheading the dramatic resurgence and expansion of the Las Vegas, Nevada, Strip in the 1990s. His companies refurbished or built some of the most currently widely recognized resorts in Las Vegas such as the Golden Nugget, The Mirage, Treasure Island, Bellagio, and Wynn. As of 2008, Wynn is the 277th richest man in the world with a wealth of $3.9 billion. His wife and business partner is Elaine Wynn.

He was born Jewish but states that he is a Buddhist and that the Dalai Lama is his teacher.

Steve Wynn is also a vegan and has offered more vegetarian and vegan options at his casinos.