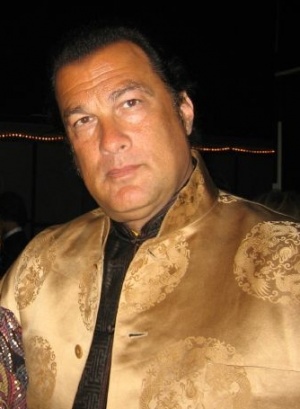 Steven F. Seagal (pronounced /sɨˈgɑːl/; born April 10, 1951) is an American action movie actor, producer, writer, director, martial artist, philanthropist, guitarist and singer-songwriter. He belongs to a generation of movie action hero actors (including Chuck Norris, Arnold Schwarzenegger, Jean-Claude Van Damme, Bruce Willis, Dolph Lundgren and Sylvester Stallone) who were featured in many blockbuster action films of the late 1980s and 1990s. A 6' 4" (193 cm) 7th-dan black belt in aikido, Seagal began his adult life as an aikido instructor in Japan. He became the first foreigner to operate an aikido dojo in Osaka, Japan. He later moved to the Los Angeles, California area where he made his film debut in 1988 in Above the Law. Since then, Seagal has become a major action star, mainly due to his films of the 1990s such as Under Siege (1992) and Under Siege 2 (1995) where he played Navy SEALs counter-terrorist expert Casey Ryback. In total his movies have earned in excess of $850 million worldwide.

Seagal is also a recording artist and guitarist and the founder of Steven Seagal Enterprises. In addition to his professional achievements, he is also known as an environmentalist, an animal rights activist and, like other actors such as Richard Gere, is a supporter of Tenzin Gyatso the 14th Dalai Lama and the cause of Tibetan independence. Spiritualism and Buddhism play an important role in Seagal's life and he has been recognized by Tibetan lama Penor Rinpoche as a reincarnated Tulku. According to Seagal in a November 2006 interview: "I was born very different, clairvoyant and a healer".

An only son, he has three sisters, one older and two younger. He now keeps a dude ranch in Colorado and a home in the Mandeville Canyon section of Brentwood, a wealthy suburb of Los Angeles. He has adopted many animals from shelters, including the cats Sylvester and Gap, and the dogs Gruff, Cole, Tyson, Hamlet, and Chaos. Steven travels back and forth to a home in Eads, Tennessee, a rural unincorporated area located just east of Memphis, Tennessee.

Seagal has been an outspoken opponent of animal cruelty which can be seen in a scene in the movie Out for Justice. This is consistent with his views on spirituality, as well as his environmentalist views (as showcased in On Deadly Ground). Seagal believes in reincarnation: "When I walk into a room some people see a dog, some people see a cow. I am all of what they see. It is their perception."

Steven has described his activism method as "shaming companies into changing," a theme that is visible in such films as On Deadly Ground and Fire Down Below. He has worked with People for the Ethical Treatment of Animals (PETA) to discourage the fur trade, and has written to the Prime Minister of India to seek increased legal protection for cows. Seagal worked effectively towards saving dogs destined to drown in Taiwan.

This activism has not diminished in recent years. For these and other efforts, Seagal was awarded a PETA Humanitarian Award in 1999. In 2003, Seagal wrote an open letter to the leadership of Thailand, urging them to enact law to prevent the torture of baby elephants.