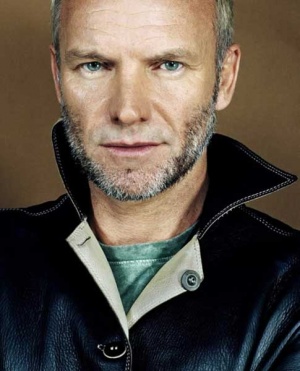 Gordon Matthew Thomas Sumner, CBE (born 2 October 1951), known commercially by his stage name Sting, is an English musician and actor from Wallsend in North Tyneside. Prior to starting his solo career, he was the principal songwriter, lead singer and bassist of the rock music band The Police. As a solo musician and member of The Police, Sting has sold over 100 million records, and received sixteen Grammy Awards for his work, receiving his first Grammy for Best Rock Instrumental Performance in 1981, and receiving an Oscar nomination for best song.

Sting has stated that he gained his nickname while with the Phoenix Jazzmen. He once performed wearing a black and yellow sweater with hooped stripes that bandleader Gordon Solomon had noted made him look like a bumblebee; thus Sumner became "Sting". In a press conference filmed in the movie Bring on the Night, he jokingly stated when referred to by a journalist as Gordon, "My children call me Sting, my mother calls me Sting, who is this Gordon character?"

To keep physically fit, for years Sting ran five miles (8 km) a day and performed aerobics. He participated in running races at Parliament Hill and charity runs similar to the British 10K. However, around 1990 he met Danny Paradise who introduced him to yoga, and he later began practising yoga regularly. His practice consisted primarily of an Ashtanga Vinyasa Yoga series, though now he practices many other forms. He has practised with notable teachers: Danny Paradise, Ganga White, Tracey Rich, Sharon Gannon, David Life, Maty Ezraty, and Seane Corn. He wrote a foreword to the book, Yoga Beyond Belief, by Ganga White in 2007.

Sting has incorporated some aspects of vegetarianism into his diet, but is not a vegetarian in any regular use of the term. He follows Vajrayana Buddhism.

He is also a fan of a football team, Newcastle United. He also wrote their song for the 1998 FA Cup final against Arsenal.