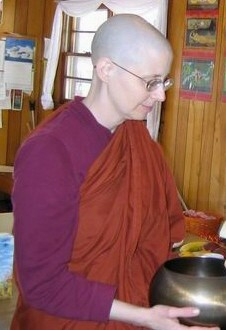 Ayya Sudhamma Bhikkhuni, from Charlotte, North Carolina, is Abbess of Carolina Buddhist Vihara. She earned a J.D. degree and was an attorney before becoming a bhikkhuni.

She became a samaneri or female Buddhist novice in 1999, at the Bhavana Society, under the tutelage of Bhante Henepola Gunaratana. In early 2003, Ayya Sudhamma traveled to South Asia, where she became the first American-born woman to gain Theravada bhikkhuni ordination inSri Lanka.

In July 2003, she returned to the United States at the invitation of the Carolina Buddhist Vihara, where she still resides and teaches, as of 2007. In 2005 she participated in the founding of the North American Bhikkhuni Association and was recognized for her achievements as an Outstanding Woman in Buddhism at the United Nations in Bangkok, Thailand on International Women's Day, in 2006.

The Videos category on the Main Page for Dhamma talks on video by Ven. Sudhamma.