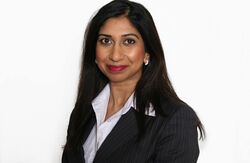 Sue-Ellen Cassiana "Suella" Braverman KC (1980- ) is a British politician and barrister serving as Home Secretary since 6 September 2022. She was the Attorney General for England and Wales from 2020 to 2022. She has been the member of parliament (MP) for Fareham in Hampshire since 2015. A member of the Conservative Party, she chaired the European Research Group from 19 June 2017 to 9 January 2018.

In the January 2018 reshuffle, she was appointed Parliamentary Under-Secretary of State for Exiting the European Union by Theresa May. She returned to the backbenches later that year after resigning in protest against the proposed Northern Ireland backstop. Braverman was appointed Attorney General for England and Wales and Advocate General for Northern Ireland by Boris Johnson in the February 2020 cabinet reshuffle; she was appointed as Queen's Counsel automatically on her appointment.

After Johnson resigned in July 2022, Braverman was a candidate to succeed him in the Conservative Party leadership election, but was eliminated from the ballot after the second round of voting. She subsequently supported Liz Truss’s bid to become Conservative leader. Following Truss's appointment as Prime Minister, she appointed Braverman as Home Secretary.

Braverman was born to Christie and Uma Fernandes (née Mootien-Pillay), both of Indian origin, who emigrated to Britain in the 1960s from Kenya and Mauritius respectively. Her mother, of Hindu Tamil Mauritian descent, was a nurse and a councillor in Brent. Her father, of Goan ancestry (who formerly was an Indian in Kenya), worked for a housing association. Braverman is the niece of Mahen Kundasamy, former Mauritian High Commissioner to London.

Braverman was born in Harrow, Greater London, and grew up in Wembley. She attended the Uxendon Manor Primary School in Brent and the fee-paying Heathfield School, Pinner, on a partial scholarship, after which she read law at Queens' College, Cambridge. During her undergraduate studies, she was president of the Cambridge University Conservative Association.

Braverman lived in France for two years, as an Erasmus Programme student and then as an Entente Cordiale Scholar, where she completed a master's degree in European and French law at Panthéon-Sorbonne University.

She married Rael Braverman in February 2018 at the House of Commons. Their first child was born in 2019 and their second in 2021.

Braverman is a member of the Triratna Buddhist Community (formerly the Friends of the Western Buddhist Order) and attends the London Buddhist Centre monthly. She took her oath of office on the Dhammapada.

Her mother was the Conservative candidate in Tottenham in the 2001 general election and in the 2003 Brent East by-election.