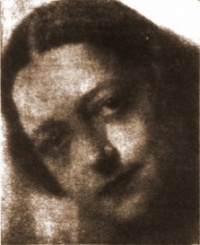 Suzanne Karpeles (1890-1969) was a gifted French scholar who played an important role in the revitalization of Buddhism in Cambodia. After graduating in oriental studies from the University of Paris she was posted to the Ecole Francaise d’Extreme-Orient in Hanoi in 1923 where she collated Sri Lankan Pali manuscripts with Khmer ones. Two years later she moved to Cambodia, soon befriended many monks, scholars and intellectuals and went on to develop a deep love of Cambodian religion and culture. Her main interest was in trying to raise the level of Buddhist scholarship. With the help of King Sisowath Karpeles she established the Royal Library in Phnom Penh, now the National Library, and supervised the collecting, cataloging, preserving and later the disseminating of Cambodia’s ancient literature.

She published the country’s first Buddhist periodical, started a mobile library project and arranged for the distribution of the Tipitaka in Khmer script in all the country’s monasteries. She also arranged for regular programs on Buddhism to be broadcast on state radio. With her urging and encouragement the Cambodian Buddhist Institute was founded in 1930 which was to publish and distribute dozens of works on Pāli Buddhist philosophy and traditional Cambodian culture. This helped the educated class to distinguish the Dhamma from Cambodian animistic and folk beliefs and to diminish Thai influence, allowing the Cambodian Sangha to emerge as a distinct and independent body. The Institute also became a meeting place for Cambodian writers, poets and intellectuals, several of who became leaders of the independence movement.

In 1940 Suzanne Karpeles was one of 15 Jews living in Cambodia dismissed from their posts by the pro-Nazi Vichy-French government. After the war she divided her time between her homeland and Cambodia and continued to make important contributions to Buddhism. Amongst her later works were French translations of the Dhammapada published in 1960 and Nyanatiloka’s Buddhist Dictionary, published in 1961.